A judge Friday said he would allow three women who claim Bill Cosby sexually assaulted them to sue the actor for libel, after Cosby’s representatives said the accusations were baseless.

Tamara Green, Therese Serignese and Linda Traitz each allege Cosy sexually assaulted them decades ago but they cannot sue him over the matter due to the statute of limitations. Instead they’ve sued him for libel over statements made by his reps dismissing their accusations as “fabricated,” “ridiculous,” “absurd,” and more.

In an opinion issued Friday, U.S. District Judge Mark Mastroianni found that Cosby’s statements—amounting to an accusation that the women were fabricating their accounts of being raped—can be found true or false, according to The Hollywood Reporter.

“The court recognizes that some jurisdictions do apply a version of the conditional self-defense privilege, which allows individuals, in certain circumstances, to publish defamatory responsive statements necessary to defend their reputation,” wrote Mastroianni. “Such a privilege does not permit a defendant to knowingly publish false statements of fact.”

The ruling will allow the defamation lawsuit against Cosby to proceed. The women are seeking unspecified monetary damages. 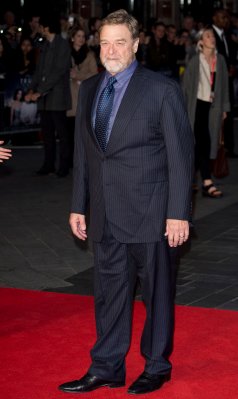 John Goodman Cut a Trim Figure at Trumbo Premiere
Next Up: Editor's Pick