The Shameful History of the KKK You Probably Never Knew

Three months after the massacre at Charleston’s Emanuel AME Church, America continues to grapple with the symbols and legacies of racial violence. This reckoning with our nation’s history of racial injustice is long overdue, but at times shortsighted. Although the Confederate flag has rightfully come under fire as the most recognizable banner of white supremacy, we should remember that violent bigotry is an American, and not merely a Southern problem.

Slavery and racial terrorism could never be confined to a single region. While African American slaves worked the plantations of the Old South, untold numbers of Indian captives and Mexican peones labored in slave-like conditions across the Southwest. And while the racial violence of the post-Civil War era proved most virulent in the former Confederacy, white terrorists also operated in Oregon, Utah and California.

Western vigilantes, some acting under the banner of the Ku Klux Klan, were especially active in California during the late 1860s and early 1870s. Rather than target the state’s small African American population, however, these vigilantes assaulted mostly Chinese workers and their white employers. Although these Western victims had a different skin color than their Southern counterparts, the underlying motivations for such violence were the same: the maintenance of white rule.

This early history of the Western Klan is virtually unknown. But in light of this summer’s attack in Charleston and the ongoing dialogue over racial violence, it deserves far greater scrutiny.

Founded in Pulaski, Tennessee by a small group of Confederate veterans in late 1865, the Klan inspired imitators in the West a few years later. Although it remains unclear whether these Western Klansmen had direct contact with cells in the South, they used familiar tactics to chilling effect. Like their Southern counterparts, Western vigilantes often operated in a clandestine fashion. For instance, they sent threatening and sometimes cryptic notes through the mail to intimidate ethnic minorities and political rivals.

A letter discovered in the Marysville mail in July 1868, signed “Ku Klux Klan,” warned one local resident to “cease your obscene and slanderous conversations at once, or the excrements will be ripped out of you.” In April 1869 the San Jose Patriot reported that an “open Ku Klux proclamation” was thrown into the city’s post late at night. The letter threatened the destruction of “all the crops of persons employing even a single Chinaman.” It was signed “Chief Owl in the Hidden Den,” perhaps as an homage to the fanciful titles employed by Southern Klansmen.

But California’s white supremacists did not limit themselves to mere threats. Contemporary reports from across the state document a litany of abuses, often committed in the name of the KKK, against Chinese workers. Through these attacks, vigilantes hoped to scare Chinese immigrants out of the labor force and therefore secure a monopoly on jobs for white workers.

In April 1868, white supremacists descended on several ranches in Nevada County, Calif. There, they beat and robbed Chinese laborers, absconding with roughly $30 in gold. One of their victims nearly died after being hanged until “blood was forced from his nostrils and ears.” In another attack near Santa Cruz, vigilantes assaulted a farm employing Chinese immigrants, where they battered the workers, “terrified the children… broke open the wine cellar and stole, broke and raised Cain generally with things,” according to the Santa Cruz Times.

Newspapers also reported on the burning of Chinese churches by suspected Klansmen in several California towns. When a local minister opened a Chinese school in Nevada City, he insisted that all instruction take place only during daylight hours on Sunday, “so as to avoid the Ku Klux Klan, who are burning churches, and will next attempt to destroy all school books.” Meanwhile in San Jose, insurance companies considered “the expediency of canceling policies… owing to the Ku Klux threats,” according to the Marysville Daily Appeal.

Reports of anti-Chinese vigilantism also came from Utah and cities in Oregon.

While white paramilitary groups like the Klan killed thousands of African Americans in the postwar South, the number of Chinese victims in the West was substantially smaller – although precise numbers are difficult to ascertain. Despite the limited activity of Western Klansmen, however, they succeeded in creating an atmosphere of racial terror, violently dissuading the use of Chinese labor in California.

In addition to these little-known vigilante raids, white supremacists targeted Chinese immigrants in several large-scale assaults. In the winter of 1867, a mob of 400 white laborers drove Chinese contract workers from their jobs on the Portrero Street railway in San Francisco. The rioters injured twelve Chinese laborers, one of whom later died of his wounds. Ten of these rioters were initially convicted and sentenced to prison, although all eventually won their release on technicalities. Like their Southern counterparts, Western perpetrators of racial violence generally walked free.

As Southern cities like New Orleans and Memphis erupted in race riots after the war, Los Angeles witnessed its own brand of racially motivated mob violence. After suspected Chinese gang members killed a white policeman in a shootout in October 1871, 500 frenzied white and Hispanic Angelenos gathered in the city’s Chinese quarter. In an orgy of revenge, the mob began rounding up Chinese residents, stabbing and shooting some, while dragging others to a makeshift gallows to be hanged and mutilated. When the dust had settled, 18 mangled Chinese bodies lay in the streets, amounting to a full 10 percent of the city’s Chinese population. None of the victims – including a respected doctor and a twelve-year old boy – had participated in the initial shootout. Again, all perpetrators were released on technicalities after serving brief sentences at San Quentin.

This history of anti-Chinese violence should not, of course, distract from the centuries of injustice that African Americans have endured. Rather, it should highlight the magnitude, adaptability and geographic sweep of American racial violence.

Dylann Roof’s act of terrorism this summer in Charleston is just the latest episode in a long history of violent white supremacy. This history is not confined to where the Confederate flag once flew. By focusing our outrage solely on the South, we may miss the many ways in which all American regions have perpetuated racist extremism. Indeed, racial violence in this country has always had a national reach. And it calls for a national reckoning.

Kevin Waite is a PhD candidate at the University of Pennsylvania, working on a dissertation titled, “The Slave South in the Far West: California, the Pacific and Proslavery Visions of Empire.” He received a BA from Williams College and an MPhil from the University of Cambridge. 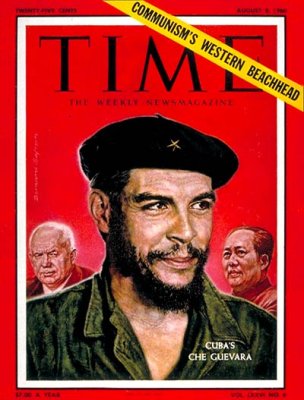 How Che Guevara Didn't Let Asthma Affect His Ambitions
Next Up: Editor's Pick