To contemporary New Yorkers, it might be the ultimate dream: just walk into the apartment you want, and it’s yours. But in Garth Risk Hallberg’s much-hyped debut novel, City on Fire (out Tuesday), that kind of informal living situation becomes a nightmare. Though the book takes a wide-ranging look at New York City, one of its primary interests is the 1970s scene in the East Village and the anarchist squatters who inhabit an abandoned building there.

As the reader comes to learn, the reason the fictional band of punks is able to pull off their outlaw lifestyle is actually more complicated than it first appears—but, in reality, it didn’t take a novel-worthy mysterious plot to pull off being a squatter in the ’70s.

Stephen Petrus, the Andrew W. Mellon Fellow at the New York Historical Society, explains that squatting increased in the ’70s and peaked in the ’80s thanks to long-term problems with the city’s economy, along with demographic changes that led to red-lining in neighborhoods like the East Village and the Lower East Side. “Landlords would increasingly neglect their buildings—they weren’t as profitable, there was a degree of disinvestment, house values decreased, rents decreased, financial institutions basically stopped supplying mortgage money to the area,” he says. Ultimately, “when landlords could no longer collect enough house rent to cover the costs, utilities and taxes, these buildings would be abandoned.”

That made them a desirable place for young newcomers to the city to set up shop. There was nothing structurally wrong with the buildings, and the neighborhood had a counterculture vibe that drew new arrivals who were attracted to “the edginess of the city,” Petrus says. Politically, they were on the fringe. “You can’t really identify them with either of the two mainstream parties, but they probably didn’t have a really coherent political philosophy,” he says. “Sometimes you hear the word ‘anarchists.’ That might be a bit of a stretch, but if you look at some of their ideas, they probably would go along in that direction.” Some had lost their jobs and become homeless; many were addicted to drugs, which were pervasive in these neighborhoods.

New York City faced massive changes in the ’70s. There was a decline in manufacturing, and with it, fewer industrial jobs. The city had gone through a fiscal crisis in the mid-’70s and was on the verge of bankruptcy, and hefty economic restructuring was underway. Demographics were shifting, too, Petrus says, as African Americans and Puerto Ricans continued to move to the city while affluent and middle-class families headed to the suburbs. And crime was “truly out of control.”

“No issue better exemplified the urban crisis than crime,” he says, noting that murder, assault, robbery and burglary were all rampant in the late ’70s—so policing squatters was not exactly first on the to-do list. “[If you’re] in the police force in the ’70s, you’re concerned about [violent crimes], these are your priorities. Rooting out people living probably pretty quietly in abandoned buildings on Avenue B, Avenue C is a lower priority.” (This would change in the late ’80s, when the city would crack down with broken windows-style policing.)

So what would become of you if you were a young squatter in the Village or the Lower East Side? “You probably just disappeared altogether from the city to start your life elsewhere, if you weren’t imprisoned or if you didn’t die, frankly, because a lot of this population suffered from addiction,” Petrus says. “This is a very transient population … It’s a lifestyle that’s almost impossible to sustain for more than a year, two years. You’re gonna get caught ultimately, or maybe you’ll be a victim of violent crime, maybe you’ll be arrested and thrown in jail. Very few ‘made it’ and entered the middle class.”

While New Yorkers today can relate to the limitations of upward mobility, the city has undergone enormous shifts in the last four decades. Today, squatting is extremely rare: “Certainly there’s illegal living happening, probably violation of building codes,” Petrus says. But as property values have skyrocketed, landlords are putting a much higher premium on their apartments. “Abandoned buildings and vacant buildings are just so rare, even in the neighborhoods that exemplify the urban crisis, like the South Bronx,” he says.

And as for the East Village or the Lower East Side? Forget about it. 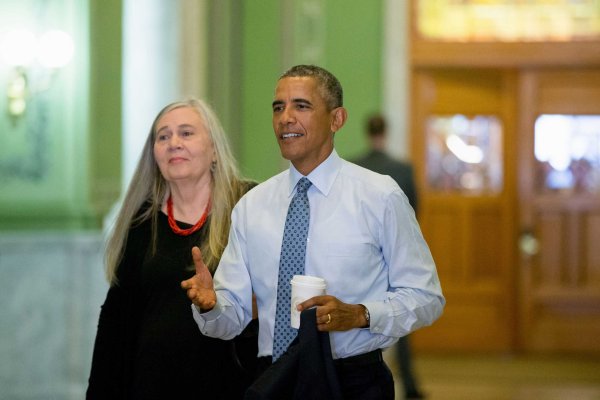 4 Things We Learned About President Obama When He Interviewed Marilynne Robinson
Next Up: Editor's Pick