J.K. Rowling surprised the world when she was identified as Robert Galbraith, the little-known author of The Cuckoo’s Calling, a 2013 mystery novel starring Detective Cormoran Strike. But she has continued to publish as Galbraith, whose dark, chilling and occasionally gory métier is a far cry from Hogwarts. Career of Evil, the third novel in the Cormoran Strike series, will be published Oct. 20. TIME has an exclusive excerpt.

A rock through a window never comes with a kiss.

Robin Ellacott was 26 years old and had been engaged for over a year. Her wedding ought to have taken place three months previously, but the unexpected death of her future mother-in-law had led to the ceremony’s postponement. Much had happened in the time since. Would she and Matthew have been getting on better if vows had been exchanged, she wondered. Would they be arguing less if a golden band was sitting beneath the sapphire engagement ring that had become a little loose on her finger?

Fighting her way through the rubble on Tottenham Court Road on Monday morning, Robin mentally relived the argument of the previous day. The seeds had been sown before they had even left the house for the rugby. Every time they met up with Sarah Shadlock and her boyfriend Tom, Robin and Matthew seemed to row, something that Robin had pointed out as the argument, which had been brewing since the match, dragged on into the small hours of the morning.

“Sarah was sh-t-stirring, for God’s sake—can’t you see it? She was the one asking all about him, going on and on, I didn’t start it …”

The everlasting roadworks around Tottenham Court Road station had obstructed Robin’s walk to work ever since she had started at the private detective agency in Denmark Street. Her mood was not improved by tripping on a large chunk of rubble; she staggered a few steps before recovering her balance. A barrage of wolf-whistles and lewd remarks issued from a deep chasm in the road full of men in hard hats and fluorescent jackets. Shaking long strawberry-blonde hair out of her eyes, red in the face, she ignored them, her thoughts returning irresistibly to Sarah Shadlock and her sly, persistent questions about Robin’s boss.

“He is strangely attractive, isn’t he? Bit beaten-up-looking, but I’ve never minded that. Is he sexy in the flesh? He’s a big guy, isn’t he?”

“Is it just the two of you in the office? Is it really? Nobody else at all?”

Bitch, thought Robin, whose habitual good nature had never stretched to Sarah Shadlock. She knew exactly what she was doing.

“Is it true he was decorated in Afghanistan? Is it? Wow, so we’re talking a war hero too?”

Robin had tried her hardest to shut down Sarah’s one-woman chorus of appreciation for Cormoran Strike, but to no avail: a coolness had crept into Matthew’s manner towards his fiancée by the end of the match. His displeasure had not prevented him bantering and laughing with Sarah on the journey back from Vicarage Road, though, and Tom, whom Robin found boring and obtuse, had chortled away, oblivious to any undercurrents.

Jostled by passersby also navigating the open trenches in the road, Robin finally reached the opposite pavement, passing beneath the shadow of the concrete grid-like monolith that was Centre Point and becoming angry all over again as she remembered what Matthew had told her at midnight, when the argument had burst back into flame.

“You can’t stop bloody talking about him, can you? I heard you, to Sarah—”

“I did not start talking about him again, it was her, you weren’t listening—”

But Matthew had imitated her, using the generic voice that stood for all women, high-pitched and imbecilic: “Oh, his hair’s so lovely—”

“For God’s sake, you’re completely bloody paranoid!” Robin had shouted. “Sarah was banging on about Jacques Burger’s bloody hair, not Cormoran’s, and all I said—”

“‘Not Cormoran’s,’” he had repeated in that moronic squeal. As Robin rounded the corner into Denmark Street she felt as furious as she had eight hours ago, when she had stormed out of the bedroom to sleep on the sofa.

Sarah Shadlock, bloody Sarah Shadlock, who had been at university with Matthew and had tried as hard as she could to win him away from Robin, the girl left behind in Yorkshire… If Robin could have been sure she would never see Sarah again she would have rejoiced, but Sarah would be at their wedding in July, Sarah would doubtless continue to plague their married life, and perhaps one day she would try to worm her way into Robin’s office to meet Strike, if her interest was genuine and not merely a means of sowing discord between Robin and Matthew.

I will never introduce her to Cormoran, thought Robin savagely as she approached the courier standing outside the door to the office. He had a clipboard in one gloved hand and a long rectangular package in the other.

“Is that for Ellacott?” Robin asked as she came within speaking distance. She was expecting an order of ivory cardboard-covered disposable cameras, which were to be favors at the wedding reception. Her working hours had become so irregular of late that she found it easier to send online orders to the office rather than the flat.

The courier nodded and held out the clipboard without taking off his motorcycle helmet. Robin signed and took the long package, which was much heavier than she had expected; it felt as though some single large object slid inside it as she put it under her arm.

“Thank you,” she said, but the courier had already turned away and swung a leg over his motorbike. She heard him ride away as she let herself inside the building.

Up the echoing metal staircase that wound around the broken birdcage lift she walked, her heels clanging on the metal. The glass door flashed as she unlocked and opened it and the engraved legend —C.B. STRIKE, PRIVATE INVESTIGATOR — stood out darkly.

She had arrived deliberately early. They were currently inundated with cases and she wanted to catch up with some paperwork before resuming her daily surveillance of a young Russian lap-dancer.

From the sound of heavy footfalls overhead, she deduced that Strike was still upstairs in his flat.

Robin laid her oblong package on the desk, took off her coat and hung it, with her bag, on a peg behind the door, turned on the light, filled and switched on the kettle, then reached for the sharp letter-opener on her desk. Remembering Matthew’s flat refusal to believe that it had been flanker Jacques Burger’s curly mane she had been admiring, rather than Strike’s short and frankly pube-like hair, she made an angry stab to the end of the package, slit it open and pulled the box apart.

A woman’s severed leg had been crammed sideways in the box, the toes of the foot bent back to fit.

Excerpted from Career of Evil by Robert Galbraith, to be published Oct. 20. Copyright © 2015 by J.K. Rowling. Reprinted with permission of Little, Brown and Co., a division of Hachette Book Group Inc., New York, NY. All rights reserved.

To read a different section of Career of Evil, please visit The Guardian. 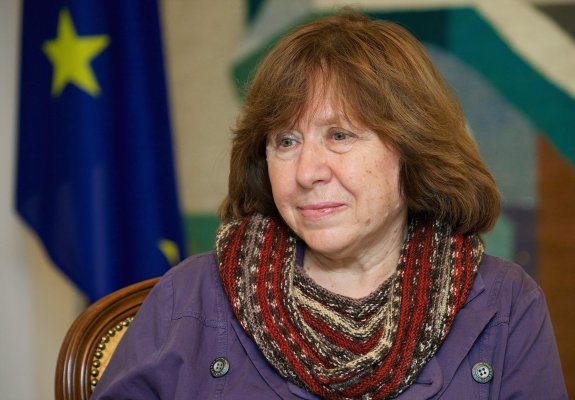 5 Things to Know About Svetlana Alexievich, the Nobel Laureate in Literature
Next Up: Editor's Pick