Hillary Clinton announced a far-reaching plan on Thursday to regulate Wall Street institutions and punish transgressions by executives, but stopped short of calling for a key measure coveted by liberals that separates investment and commercial banking.

Clinton’s plan, which would expand the power of the Securities and Exchange Commission and other federal entities to crack down on financial crimes, comes after months of Clinton calling for curbs on risky financial transactions. She has made Wall Street regulation a central theme of her campaign, and promised to go “beyond Dodd-Frank,” the landmark financial legislation after the Great Recession, by imposing fees on banks that take on excessive risk and breaking up overly large institutions.

Clinton’s new proposals are being closely watched by Wall Street and liberal banking reform advocates, who are skeptical of the former Secretary of State’s relationship with banking institutions. She has spoken often at events sponsored by Goldman Sachs, Citibank, and JPMorgan Chase, and she and Bill Clinton have accepted millions in speaking fees from major Wall Street institutions.

The Democratic frontrunner has taken a populist stand on Wall Street since beginning her campaign, and her proposals so far—which include slowing the revolving door between Wall Street institutions and the government and calling for the imprisonment of law-breaking bank executives—have won accolades from Democrats.

“To prevent irresponsible behavior on Wall Street from ever again devastating Main Street, we need more accountability, tougher rules, and stronger enforcement. I have a plan to build on the progress we’ve made under President Obama and do just that,” Clinton said on Thursday. “We can’t go back to the days when Wall Street could write its own rules.”

But even before the full details of Clinton’s plan had been announced, liberal critics were accusing her of backing away from a central issue: reinstating the Glass-Steagall Act, a Depression-era law that created a “firewall” between normal commercial banking and riskier investment banks.

The law was originally passed in 1933 and intended to protect taxpayer dollars and individual commercial bank deposits from high risk. Some economists argue that Glass-Steagall’s repeal under President Bill Clinton put the banking system at risk ahead of the 2007-2008 financial crisis.

Even while Clinton’s multi-part plan won wide praise on Thursday, Glass-Steagall is a sticking point for liberals and some economists who view it as an important inhibitor of risk.

“In a lot of ways it was stronger than what I expected from her given her close Wall Street ties,” economist Dean Baker said about Clinton’s plan. But, he added, “I would like to go back to Glass-Steagall to have the strict separation” between commercial and investment banking.

The effect of its repeal on the financial crisis has been hotly debated among economists. Advocates for comprehensive reform say investment banking’s disastrous bets on the subprime mortgage market rippled quickly into the rest of the financial industry, partly because the Depression-era Glass-Steagall had been undone nearly a decade earlier.

Clinton has been pressed for her position on Glass-Steagall for some time but said she Thursday she does not embrace reinstating it.

“One serious approach being advocated is to pass an updated Glass-Steagall Act, separating commercial and investment banking, to reduce the size of the banks and the risk of a taxpayer bailout,” Clinton said. “I certainly share the goal of never having to bail out the big banks again, but I prefer the path of tackling the most dangerous risks in a different way.”

Her position may be a point of vulnerability with the liberal base. Some Democratic presidential candidates have already signaled they may target Clinton’s decision not to call for reinstating Glass-Steagall at the debate on Oct. 13 in Las Vegas.

“We need a defined firewall between Wall Street and taxpayers so that we are never again forced to bail out a bank’s reckless behavior,” O’Malley said. “We need a modernized Glass-Steagall… Anything short of that is a failure to deliver on our promise to prevent a repeat of financial collapse in 2008, which cost millions of Americans their jobs, their homes, and their lifesavings.”

Robert Reich, former Secretary of Labor under President Bill Clinton, has been critical of Hillary’s demurral on Glass-Steagall. After a Clinton advisor suggested in July she would not push to reenact Glass Steagall, Reich in a blog post called the decision a “big mistake.”

“It’s a big mistake economically because the repeal of Glass-Steagall led directly to the 2008 Wall Street crash, and without it we’re in danger of another one,” wrote Reich, now a professor at the University of Berkeley. “To this day some Wall Street apologists argue Glass-Steagall wouldn’t have prevented the 2008 crisis because the real culprits were nonbanks like Lehman Brothers and Bear Stearns. Baloney.”

Bill Clinton has dismissed the idea that Glass-Steagall was tied to the financial crisis, pointing the two large financial firms, Bear Stearns and Lehman Brothers, as the cause of the crisis. Those were investment banking institutions not tied to commercial banking entities. Liberal economists counter that without Glass-Steagall worsened the effect of Lehman and Bear Sterns’ collapse on the financial system, and may have caused regulators to overreact.

Less controversial among progressives is Clinton’s decision to embrace a “risk fee” on financial institutions with more than $50 billion in assets to penalize banks for making risky investments. It would scale higher as greater amounts of risk, deterring banks from taking on too much debt.

Clinton’s plan would also place a tax on high frequency stock trades, which have been criticized for introducing high volatility in the stock market.

Her plan would focus on punishing financial executives for wrongdoing, targeting government fines at senior employees instead of just whole institutions, and call for culpable individuals are sent to jail.

“We also have to do more to hold individuals accountable for their bad behavior,” Clinton earlier said this week while campaigning in Iowa. “People should have gone to jail.”

Clinton would also strengthen the Volcker Rule, a key part of the Dodd-Frank Act passed in the immediate aftermath of the financial crisis. The Volcker Rule is meant to prohibit banks form making risky bets with money insured by the federal government. Clinton’s plan would close loopholes in the rule that allow banks taxpayer-insured money invest in risky hedge funds.

She would increase funding for the SEC and other regulators, increase oversight of hedge funds and non-bank lenders.

Liberals’ response to Clinton’s plan follows the pattern of a one-armed embrace the left has given Clinton since she began her campaign. The Democratic base has tended to welcome Clinton’s proposals with a measure of skepticism, even while her progressive stance on key issues, like calling for the imprisonment of rule-breaking Wall Street executives.

Progressives have already claimed credit for a series of tenets in Cinton’s platform. Clinton has already announced plans to slow the revolving door between government and Wall Street and seek to ensure regulators are independent of financial interests.

“While the details we’ve seen of Sec. Hillary Clinton’s Wall Street accountability plan appears to demonstrate a genuine commitment to ensuring criminals on Wall Street aren’t treated differently than criminals on Main Street, her continued rejection of a new Glass-Steagall is troubling,” said Neil Sroka, spokesman for Democracy for America, a progressive group with one million members.

Vermont Sen. Bernie Sanders, the most serious threat to Clinton’s nomination, has voiced strong support for a bill introduced by Sens. Elizabeth Warren and John McCain to reinstate a version of Glass-Steagall.

In an implicit jab at Clinton, Sanders pointed to his longtime opposition to Wall Street deregulation, including under President Bill Clinton.

“Given the image of big banks today, it is easy now to take on Wall Street. I was there when it was not so popular,” said Sanders, who opposed the push to repeal Glass-Steagall in 1999. “I was proud to lead the fight in the House against repealing the Glass-Steagall Act. I predicted then that such a massive deregulation of the financial services industry would seriously harm the economy.” 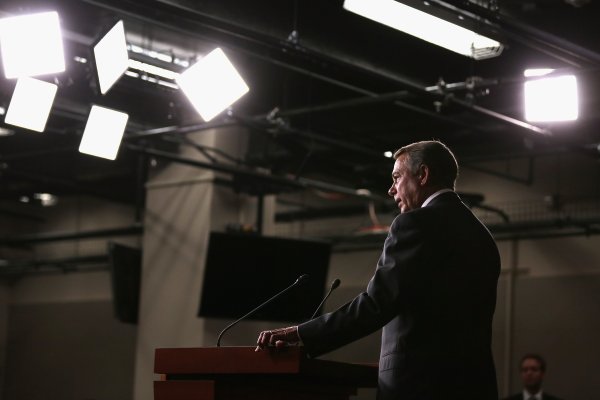 Here's What Could Happen Next in the Race for Speaker
Next Up: Editor's Pick