The operations headquarters of the Gallup organization on June 7, 2012 in Omaha, Nebraska.
Christian Science Monitor/Getty
By Daniel White

When it comes to election polling, it’s the best of times and the worst of times.

On the positive side, there is more polling than ever from private universities, news media and small independent shops. Sites like HuffPost Pollster, RealClearPolitics and FiveThirtyEight also provide sophisticated analysis of what the polls mean.

On the negative side, the glut of polls often doesn’t add up to much, while problems with getting accurate results are starting to hurt the polling industry’s reputation.

The announcement this week that Gallup, one of America’s most storied pollsters, will no longer do horse-race polling on who’s ahead in the 2016 election cycle only underscored the huge changes in the industry.

Michael Dimock, president of the Pew Research Center, said it’s simply not worth it for places like Gallup to stay in the game.

“It feels like some kind of pivot, mostly because they way the rest of the polling market has developed,” he told TIME. “What you’ve seen is the arrival of a whole ton of polls that are covering that horse race side of it, just jamming us with new data day in and day out on the fortunes of the candidates.”

Both Pew and Gallup are instead marshaling their resources to find out what voters think about the issues.

Cliff Zukin, a professor of public policy and political science at Rutgers University, said that makes sense, given the costs involved with doing reliable polling for a place like Gallup. The decision also came after a botched final pre-election poll in 2012 that put Mitt Romney ahead of President Obama.

“These guys have contributed to the political process, they’re not just in it for the short time,” said Zukin. “They do not want to mislead the public and they don’t want to take a chance of not being able to do it well—it takes a lot more resources to do it well now.”

The former head of the American Association for Public Opinion Research, Zukin wrote wrote a June op-ed in the New York Times, detailing two major problems with polling right now: people who only have a cellphone, and people who don’t respond to pollsters.

While smaller polling outfits get around these problems by using automated surveys or seeking out respondents online, methods that some critics say can distort results, Pew and Gallup stick to more expensive traditional methods, Zukin said.

Dimock, Pew’s president, says the high opportunity costs traditional outlets face with each poll means it makes sense for them to ask questions that have more staying power than who’s ahead today.

“We’re loaded with data over there,” said Dimock. “Where we really could use more data is at this broader level of citizenship and understanding the forces that are shaping the context of the election and they ways that elections affect people above and beyond who they’re going to choose.” 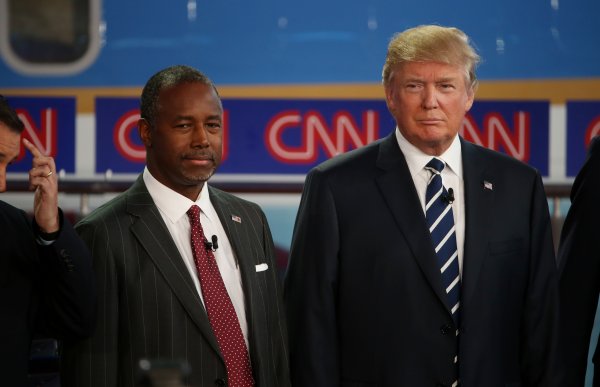 Ben Carson Says He and Trump Would Not Be 'Compatible' Running Mates
Next Up: Editor's Pick