Adding a new level of House Republican chaos, Majority Leader Kevin McCarthy abruptly announced he is withdrawing his name from contention just minutes before the scheduled vote to elevate him to Speaker.

McCarthy’s abdication leaves a wide-open field to replace Speaker John Boehner who plans on retiring at the end of the month.

Less than half an hour into a conference meeting called to elect the next Speaker, McCarthy stood up in front of the conference and said he is not the right person for the job. Boehner then postponed the election.

McCarthy’s move comes a day after the conservative Freedom Caucus, a loosely affiliated group of about 40 members, announced they would support long shot rival Florida Rep. Daniel Webster, who is serving his third term, for the post. Also contesting the position is House Oversight Committee Chair Jason Chaffetz of a Utah.

McCarthy had widely been seen as the likely winner of Thursday’s vote, but what lay in doubt was whether he could garner 218 Republican votes on the floor of the House. Republicans have the largest majority in 80 years of 247 seats, but the next Speaker cannot lose more than 28 Republican votes or he or she would have to rely on Democratic support to gain a majority in the 435-member chamber.

It was this Catch-22 that led to Boehner’s surprise resignation last month. Boehner, who has said he plans to leave office on Oct. 30, was facing a no-confidence vote on the floor that he would have needed to rely on Democrats to overcome. The same scenario seems to have already brought down McCarthy’s speakership before it had even begun.

“I have the deepest respect and regard for each Member of the Conference and our team as a whole,” said McCarthy in a statement. “It is imperative for us to unite and work together on the challenges facing our country. Over the last week it has become clear to me that our Conference is deeply divided and needs to unite behind one leader. I have always put this Conference ahead of myself. Therefore I am withdrawing my candidacy for Speaker of the House.”

Freedom Caucus members have been specific in what they want in exchange for their support. They want to change the form of steering committee, which determines the policy direction of the House, so that its not dominated by the Speaker’s people—Speaker’s generally draw their power from controlling this committee; the want the committees to elect their own chairmen, versus being appointed by the Speaker; and they want more representation in the leadership ranks below Speaker.

There is no heir apparent now as Republicans look to reorganize. Support could coalesce around Chaffetz, a more likely candidate than Webster. Or others could throw their hats in the ring. One person who could draw board support is House Ways and Means Chair Paul Ryan, but he stated again Thursday that he does not want the position.

Indeed, many wonder, with the Speaker at the mercy of a relatively small band of the right wing while forced to try and pass compromises coming out of the Senate, is there anyone who can—or would want to— govern the increasingly chaotic House?

White House spokesman Josh Earnest said it was time for Republicans to “make some decisions” about how to lead.

“Somebody within … the House of Republicans will have to step forward and demonstrate an ability to either tame the forces of that small but vocal group of extreme ideologues or buck up the main stream majority within the House Republican caucus,” Earnest said.

Earnest said the White House remains hopeful that whoever ends up being the Speaker will be able to unite the conference to get debt ceiling legislation and other important bills passed.

“There’s no denying that there has been some irresponsible rhetoric,” he said. “But we continue to be hopeful that cooler heads will prevail as they have in the past.”

On the campaign trail, Republican presidential candidate Jeb Bush said he was surprised by the news.

“I think Kevin McCarthy was a good person, a good man,” said Bush, who added that he was not going to “inject” himself into the race. “There are a lot of good people who can serve in leadership in Congress for sure.”

Boehner, who was scheduled to go on “The Tonight Show” with Jimmy Fallon Thursday, reportedly canceled the appearance.

Correction: The original version of this story incorrectly described Rep. Daniel Webster. He is serving his third term in the House.

Read Next: Why the House Speaker Fight Is Poised for Chaos 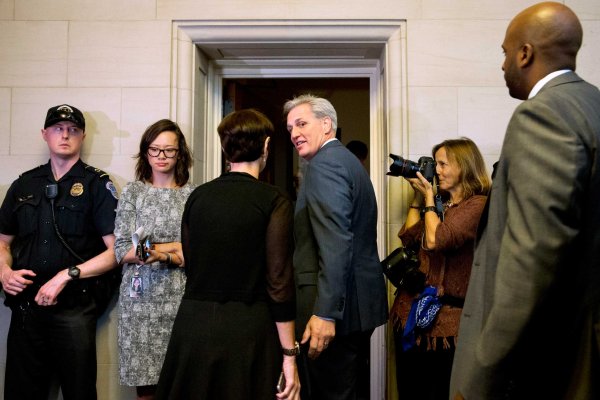 House of Chaos
Next Up: Editor's Pick