These 5 Kits Can Teach Kids About Computers and Coding

As adults and parents, we’re quick to point out how much simpler—and therefore better—things were when we were young. Instead of iPads, we had books. Instead of Nerf Blasters, we had Nerf footballs. And instead of Lego’s Jurassic World Raptor Rampage set, we had, well, just a bunch of Legos.

But there’s no debating that today’s tech-teaching toys are immeasurably better than the junk we had growing up. These 5 products can help teach curious young ones about the ins-and-outs of electricity, coding, and computers.

Building a wild structure in Minecraft is great for kids’ creativity. But you can take learning a step further by having them construct the computer on which they can play the popular sandbox game. With a Raspberry Pi 2 microcomputer at its heart, Kano helps kids understand the ins-and-outs of computer circuitry, getting them on their way to an education in coding.

The $149 kit’s open source nature lets little ones wander without borders, and peripherals like speakers and Wi-Fi dongles can let you gradually add capabilities to the system (or take them away, if the sound effects are grating on your adult nerves). Future add-ons, like the forthcoming $129 Kano Screen Kit, mean there are upgrades on the way for this system — and your little one’s technological know-how.

Learning the science of circuitry can be a snap — at least that’s what the makers of this versatile kit hope. With more than 60 color-coded modules, there’s nearly an infinite amount of hacking, programming, and playing that kids can do with this easy-to-use playset. With bits as inexpensive and varied as the $5 power source and the $19 light wire, and kits geared toward specific interests like the $249 smart home set and the $159 music synthesizing pack, there’s something for everyone and every wallet, adult and children alike.

LittleBits’ newest collection, the $199 Gizmos & Gadgets Kit, comes with the makings of more than 10 projects, like a DIY remote-controlled vehicle and a sound-triggered bubble-blower. Accompanied by a LittleBits app, it even stirs smartphone technology into the mix.

Prying that iPad out of your little genius’s hands might be tough, considering how well-accustomed kids have become to them. Lightup can help make the transition from touchscreen to touching tech easier with its app-connected approach to learning electronics. The $42 Edison kit starts kids off with a series of magnetic blocks (which means no wiring or soldering involved) helping them learn how to make simple circuits.

But what if a creation isn’t working? That’s what the iPad app is for—just point the rear-facing camera at the misfiring gizmo, and its augmented reality feature will show what’s missing or wrong on the screen. Throw the $95 Tesla kit into the mix—with its array of magnetic add-ons including a programmable micro controller block—and kids can start building their own burglar alarms, television remotes, and more.

From making airplane sounds while feeding a baby to playing “who can be the quietest?,” many a parent has survived—neigh, thrived—by turning the drudgery of parenting into a game. But what happens after little ones get a Wii controller in their hands? Makey Makey is a sure-fire way to recover.

A circuit board that plugs into a computer’s USB port on one side and to anything else—bananas, Play-Doh, construction paper—on the other, this $49 kit turns everyday objects into controllers for video games, synthesized musical instruments, and even computer keyboards and mice. The MIT-born company even has lesson plans for integrating Makey Makey into the classroom; it plans to release a $24 to-go-sized version that’s about the size of a pack of gum this December.

You can argue with your kids over who had it better (or worse), but one thing almost everyone agrees on is that Legos are great. Taking them to the next level, this collection of stackable electronic modules can turn everyone’s favorite plastic bricks into miniature, mobile computers.

With an open-source Arduino board and Lego-sized snaps, mCookie kits come with Bluetooth, Wi-Fi, and GPS capabilities and more. Starting at $78, the 101 Basic kit has four modules and six sensors to give life to your Legos, and it also packs a lithium-ion battery so your creations can run wild. So what can you build with computer-powered Legos? Only the world’s coolest music players and weather sensors, among other things. Snap them onto that Jurassic World Raptor Rampage set, and there’s no contest—today’s toys are way better than what we had when we were kids. 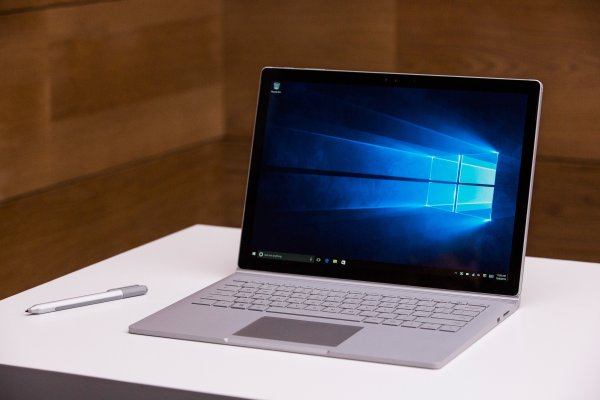 Hands-On With Microsoft's New MacBook Killer
Next Up: Editor's Pick