Turn the pages of TIME’s special report on migrants this week and you’ll see pictures of anguished refugees, of riot police at the barricades, of ordinary Europeans doing their all to help. The human dimension of this story is undeniably compelling. But to understand how a historic migration will change Europe, you need to look past the daily drama toward its longer-term political and economic implications.

The E.U. has been distracted by its economic troubles and the crisis in Ukraine, warns David Miliband, the former British Foreign Secretary who now heads the International Rescue Committee. “Europe has been late to the game on the refugee crisis,” says Miliband. “It is now scrambling to catch up.”

On Sept. 22, a majority of E.U. ministers voted to approve an agreement on the migrant crisis that raises more questions than it answers. The plan will resettle 120,000 refugees. It commits more money for humanitarian aid for those still in camps in North Africa and the Middle East to make conditions there more tolerable–and discourage onward movement toward Europe. To appease skeptical voters back home, the ministers also promised to tighten the E.U.’s porous external borders. Finally, the leaders pledged to do more to stabilize Syria, presumably through a combination of military and diplomatic pressure.

It’s an agreement that has many shortcomings. Those 120,000 refugees amount to a small fraction of the total number that will arrive in Europe in the coming months. Improving life in Middle Eastern camps is a positive step for the refugees dwelling in the camps and those operating them, but it’s not a permanent solution to anything. There is no credible and affordable plan that can secure borders around Greek islands or in Turkey. Russian air strikes in Syria have made a difficult security situation that much more complex and dangerous. And if NATO and Western diplomats could stabilize Syria, they would have done it already.

The larger European project depends on consensus among E.U. member states. This agreement exposes widening divisions over the migrant crisis, as several East European governments bitterly oppose the deal. Slovak Prime Minister Robert Fico has said he won’t implement it. Enrico Letta, Italy’s former Prime Minister, though not optimistic, says E.U. leaders will ultimately find common ground. “There will be no success with only national answers to such global issues,” he says.

The pull of nationalism

As time passes, those at the negotiating table will feel the political ground shift beneath their feet. This flood of Middle Eastern migrants, arriving at a time of internal threats from ISIS and its followers, boosts the popularity of opposition parties that want to shut the door to immigration. It also forces more mainstream parties to toughen their rhetoric. The trend is obvious in Hungary, where Prime Minister Viktor Orban has adopted a hard-line approach toward refugees in part to ensure that Fidesz, his right-wing party, can check the growth of Jobbik, a farther-right party. The Czech Republic and Romania joined Slovakia and Hungary in voting against last month’s first-step agreement.

There’s also a nationalist surge under way in Western Europe. In Italy, the Northern League is using the refugee crisis to undermine support for Matteo Renzi’s government. In France, the far-right National Front continues to poll ahead of both the ruling Socialist Party and the center-right Republican Party. In Britain, the anti-E.U. United Kingdom Independence Party (UKIP) remains a political threat to David Cameron’s ruling Conservatives. That limits the Prime Minister’s ability to be more generous on the refugee crisis in advance of the U.K.’s referendum on continued membership in the E.U., which will probably take place next year.

The obvious focal points of these fights are Europe’s internal borders. Twenty-two of the E.U.’s 28 members are part of the Schengen Agreement, which allows for passport-free transit across borders among member states. Four non-E.U. states–Switzerland, Norway, Iceland and Lichtenstein–are also members. Within the E.U., only the U.K., Ireland, Bulgaria, Romania, Croatia and Cyprus are outside Schengen. There are two reasons this agreement is crucial for the idea of a united Europe “whole and free.” First, it speeds the flow of commerce across borders and reduces costs, boosting economic activity. Second, it’s a powerful symbol of European unity. Countries that once waged war on one another no longer even have border guards.

Under Schengen rules, a country may reimpose border controls for short periods under emergency conditions. Several E.U. governments have responded to the migrant crisis with temporary border restrictions. Will more countries tighten their borders? And will these temporary measures truly prove temporary? Adding to the concerns, unless border controls are in place, there is no way to keep migrants from leaving countries where they are resettled if they want to live somewhere else in Europe–like Germany or Sweden, the preferred destinations for most refugees. A revolt by multiple countries with defiant governments might well punch a hole in a central pillar of European unity. As Letta puts it, “Schengen is gone if the crisis continues.”

The role of Germany

As with every other important challenge facing Europe, from Greece to Ukraine, Germany is the crucial player. Perhaps stung by criticism of their tough treatment of Greece, Germans and their elected officials have rallied to the cause of helping Muslim migrants. Germany received about 200,000 asylum requests in 2014. Chancellor Angela Merkel has said Germany will welcome up to 800,000 refugees in 2015, and some estimates place the number as high as 1 million or more. The country’s generosity may well encourage those still in the Middle East to think that now is the time to bring their families north.

How long can this openness last? An attack earlier this year in which two asylum seekers killed a mother and son shopping at an Ikea store in Vasteras, Sweden, demonstrates just how quickly two deranged people can cast suspicion on tens of thousands of other foreigners. Paris’ Charlie Hebdo attack earlier this year remains fresh in the minds of Europeans, who are increasingly worried about the possibility of jihadis returning from the battlefield in Syria. A similar attack in Germany might shift opinion quickly against Merkel and her approach to this crisis.

There are broader questions we can’t yet answer. How will Germany, distracted by domestic controversies over migrants, approach talks with Greece the next time bailout questions must be negotiated? Can Germany pull together a coalition of states to hold the Greek government to its commitments?

What impact will the migrant crisis have on E.U. sanctions on Russia? Some in Europe fear that Russia’s actions will make Syria more unstable, adding to the exodus. Others welcome Russian involvement there because they hope that even forced stability will stem the tide of refugees. So far, that debate is tilting in favor of those who want to ease or lift sanctions as long as the Ukraine conflict remains quiet.

What does the migrant crisis mean for Britain and its referendum on continued E.U. membership? “The real danger in the U.K. is that the debate about migration is, deliberately or otherwise, confused with the debate about refugees,” says Miliband. The U.K. is not a member of Schengen, but that hasn’t stopped desperate refugees from trying to enter Britain by any means necessary. Fear that Britain’s government can’t control the borders and will face E.U. demands to accept more migrants empowers the U.K.’s Euroskeptics. Some members of the ruling Conservative Party now fear the political power of UKIP from their right more than the demoralized and marginalized Labour Party on the left, and it may be more difficult for Prime Minister Cameron to rally support for the E.U. from many of his own legislators.

What about Europe’s relations with the U.S.? Crucial for the future of U.S.-European ties is the fate of the Transatlantic Trade and Investment Partnership, an enormous potential trade deal now under negotiation. That deal can’t move forward at a time when European governments are distracted by crisis after crisis. This potential game changer for transatlantic relations looks increasingly at risk.

Finally, add the migrant challenge to the long list of issues distracting European leaders from the unfinished business of mending the euro zone’s original design flaws. Tighter coordination of fiscal policy and more effective regulation of Europe’s banking sector–two problems that hobbled the E.U. during the financial crisis–are becoming ever more distant goals. Europe whole and free depends on shared values and an underlying singleness of purpose. The migrant crisis puts European unity at risk like nothing we’ve seen since the Cold War’s end. 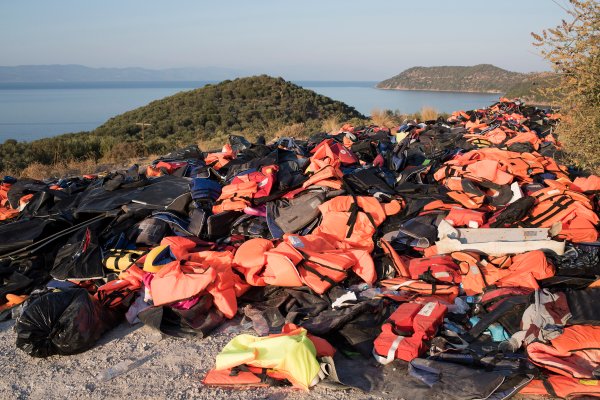 Meet the Smugglers Bringing Migrants to Greece
Next Up: Editor's Pick