Barack Obama walks with Pope Francis down the West Wing Colonnade to a meeting in the Oval Office of the White House in Washington, DC, on Sept. 23, 2015.
Mandel Ngan—AFP/Getty Images
By Tanya Basu

Pope Francis’ American visit has earned him some new fans among some very unlikely groups of people, including liberals and non-Catholics, according to a Pew Research Center survey of 1,000 adults released on Wednesday.

In the week immediately after Pope Francis’ visit to the United States, 28% of American adults report a more positive view of the Church, with just 6% saying they had more negative views. Fifty percent of Catholics also had a more positive view of the Catholic Church following the visit, and 22% of non-Catholics said the same. Those who identified as liberals or Democrats also respected the Church more after the Pope’s visit, with 39% and 35% respectively expressing admiration after the visit. In fact, the Pope is more popular among Democrats than Republicans and conservatives.

But but while the Church has made measurable progress among many following the pope’s tour, most Americans’ opinions remained unchanged: 58% of Americans said Pope Francis’ visit did not affect their feelings about the Church.

But while Francis’ visit may helped have won over many outside the faith, the pope’s overall approval ratings among Catholics—at 81% as of this month—are actually equivalent to Pope Benedict’s ratings after his visit to America in April 2008, according to Pew. The data suggests that simply being exposed to the Pope domestically might increase approval ratings among non-Catholics, but Catholics themselves may be harder to persuade. Francis has actually seen a dip in popularity this year among fellow Catholics; down from a peak of 90% approval in February, and 86% approval in June. 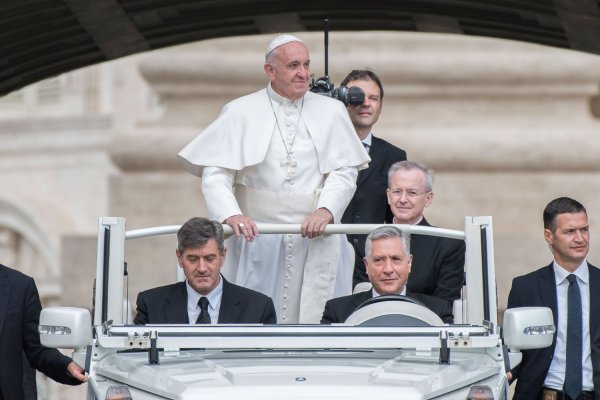 Pope Met With Gay Couple Before Kim Davis
Next Up: Editor's Pick