As the clock ticks toward Tuesday’s Democratic party debate, political fans of Vice President Joe Biden are holding out hope that he may still decide to formally announce his candidacy for the presidency in time to appear behind a podium next week. Though his supporters may be frustrated by Biden’s thoughtful—or drawn-out, depending how you look at it—decision-making process, he could still mull the question for months before he’d set any records for late-breaking campaign news.

Take, for example, the 1992 presidential race:

As of July the prior year, Paul Tsongas—whom TIME’s John Skow later called “a decent fellow who needs career counseling”—was the only Democrat who’d put his name forward for that year’s race against incumbent President Bush. Bill Clinton seemed like a good prospect, as did Al Gore, but nothing was official. TIME predicted that the candidacy declarations would come soon, at least for most people. For New York’s Mario Cuomo, however, “the 800-lb. gorilla of the party,” things were different. “[The] Governor’s fund-raising clout and popularity among Democratic activists make him the only one who can afford to bide his time,” TIME noted.

He had wavered similarly for 1988, when TIME dubbed his decision-making “Hamlet-like” and credited his lawyerly ability to see both sides of an argument for his hesitation. But that time, even though he had gotten some hopes up, it had been as early as March 1987 when he announced that running would be too hard on his family and his state.

Read More: How the Flooding in South Carolina Could Hurt Joe Biden

This time around, bide he did.

As of November, Democrats were still “salivat[ing]” at the possibility that Cuomo might run, and the potential candidate was still making up his mind—and keeping the nation up to date on where he stood, even as he went back and forth on it. It was, TIME noted, a strategy with lots of potential benefits. Though Cuomo was delaying a full-on start to his candidacy, he was giving the nation and the media time to react to the possibilities. He could announce at one moment that he was thinking a run sounded like a good idea, and at the next that it didn’t look likely. With each announcement, his team had another opportunity to take the party’s pulse. (That’s also a strategy that, it should be noted, hasn’t lost its oomph in the years between then and now.)

Come December, when he announced his decision once and for all, it appeared that the naysayers had had it right all along. His main concern, he said, was that he had an obligation to the people of New York, who had elected him. The state wasn’t in great shape, and if he ran for President the legislature in Albany might make things even more difficult for his plans, which would leave him with a negative legacy in his state even if he made it all the way to the White House. Many campaign watchers were shocked at the news:

Months later, Cuomo supporters were still hopeful that he’d reverse his decision, but by then Clinton was well on his way to the nomination—and eventually the White House. And not a year had passed before Cuomo found himself in another decision-making situation, when his name was thrown around as a potential Supreme Court justice. In the months before he informed the President that he would not like to be considered, he joked about his reputation for delay, still without announcing his intentions: “‘If an offer were made, I would answer the question so swiftly that every one of you in the media would write, ‘This, surely, is the most decisive man in America,'” he said.

Back in 1987, when Cuomo first declined to run, TIME had guessed that a certain someone might stand to gain from that decision: “Benefiting most may be Senator Joseph Biden of Delaware,” the magazine posited. “Like Cuomo, Biden is considered a powerful speaker, one who can inspire the emotions of party faithful who are left unmoved by [Gary] Hart’s more cerebral approach.”

Biden ended up dropping out of the race early too that year, but that doesn’t mean he didn’t benefit from Cuomo’s actions. After all, the Vice President may still be learning from the late Governor’s example. 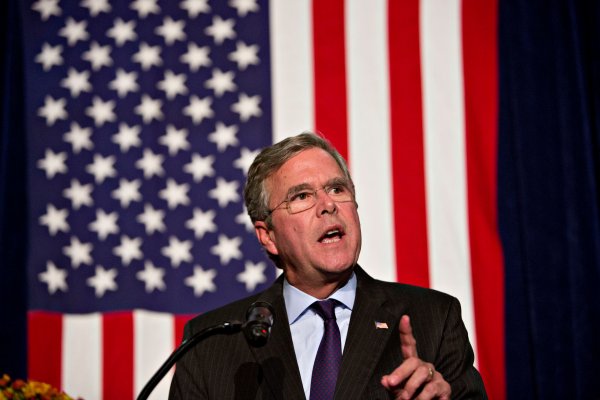 Jeb Bush Just Doesn't Get It
Next Up: Editor's Pick