Crazy Ants Are About to Invade Houston

Houston’s KPRC and CBS Houston are warning residents that “crazy ants” are set to “invade” the area with renewed vigor this week.

Tawny Crazy Ants, nicknamed Rasberry Crazy Ants after a local exterminator Tom Rasberry who discovered them in 2002, live under rocks, lawns, and trees, tend to crawl into electrical equipment, damaging machines. Rasberry told KPRC that they are “much more powerful” than fire ants, one of the world’s worst invasive species.

“There is no way to contain them,” according to a December The New York Times magazine profile. “In the fall, when the temperature drops, the worker ants are subject to magnificent die-offs, but the queens survive, and a new, often larger crop of crazy ants pours back in the following spring.”

Originally believed to come from central South America, the crazy ants have spread throughout Texas to southern Louisiana, Mississippi, Georgia and Florida because “they can take up residence in everything from a house plant, to an empty container left outside, to an RV, so they’re easily transported by us,” according to Ed LeBrun, an invasive species researcher at the Brackenridge Field Laboratory at the University of Texas at Austin’s College of Natural Sciences.

Pest specialists also told Houston news outlets that residents can help stop the spread of the crazy ants by removing mulch and extra wood in their yards. 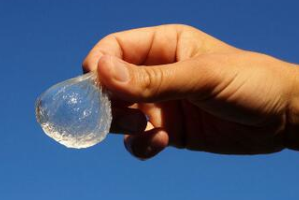 This Edible Water Blob Could Replace Plastic Water Bottles
Next Up: Editor's Pick