Former Secretary of State Hillary Clinton will roll out a plan to “go after risk” in the financial markets, she told Iowa voters Tuesday, stopping short of calling for reinstating the tough financial regulations her husband repealed.

Fielding questions from an audience in Davenport, Clinton previewed the plan to be announced next week, when she is set to participate in the first Democratic debate in Las Vegas. Citing the support of former Rep. Barney Frank, one of the authors of the Dodd-Frank financial regulation reform bill, Clinton promised to fully implement the law, while expanding on it to focus on risk.

“I’m going to be proposing in the next week, what I think would be the best way to combat Wall Street abuses and to rein-in ‘too big to fail’ banks and other institutions,” Clinton said.

Read More: What to Know About Hillary Clinton’s Economic Proposals

Clinton faces pressure from her left flank to get tough on Wall Street, most threateningly from Vermont Sen. Bernie Sanders, who has made attacks on the financial sector a selling point of his insurgent campaign. Like Sanders, Clinton called for the prosecution of individual bad actors on Wall Street.

“We also have to do more to hold individuals accountable for their bad behavior,” Clinton said, citing former Fed Chairman Ben Bernanke’s reflection in his new memoir that he wished that more executives during the financial crisis faced prosecution. “People should have gone to jail,” she added.

The questioner asked whether Clinton would support reinstating the Glass-Steagall provisions her husband, former President Bill Clinton, repealed. That series of laws limited what securities activities commercial banks could engage in and many blame that move for helping lay the groundwork for the 2008 financial crisis.

“If you only reinstate Glass-Steagall, you don’t go after all these other institutions,” Clinton said of hedge funds and big financial firms she says “have too much power in our economy.” She said her proposal would be “a more comprehensive approach to what we need to rein in the big institutions, including the big banks.”

Read Next: How Wall Street Won 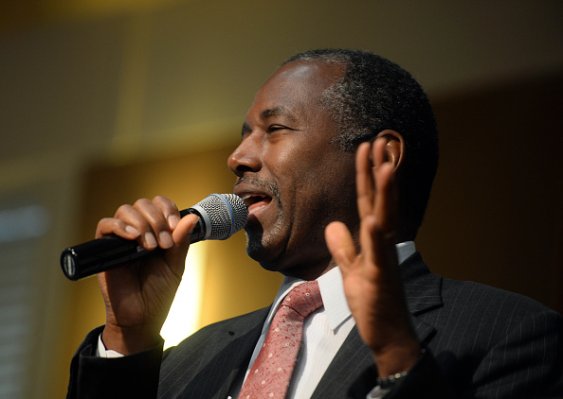 How Ben Carson Went from Folk Hero to Conservative Rock Star
Next Up: Editor's Pick