Have you bought a lottery ticket this week? There’s no shame in it. If you’re like 80% of Americans, you’ve bought one at some point in your life.

If past trends are any indication, that number may soon increase: the national Powerball lottery, in which 36 states participate, is changing. For the drawing on Wednesday, players will be able to choose from a wider range for the main draw, while the range of numbers for the Powerball—the extra drawing that makes a jackpot—will decrease. The chances of winning any prize will get a little sweeter (from 1 in 32 to 1 in 25) and the third place prize (for matching 4 numbers and the Powerball) will increase from $10,000 to $50,000. But the odds of winning the jackpot get worse: from 1 in 175 million to 1 in 292 million. With the jackpot likely to roll over longer, a $1 billion prize may arrive sometime very soon. The highest jackpot so far has been $590 million, won in 2013.

Given that ticket sales rise every time the jackpot gets up into the hundreds of millions, how many people would buy a ticket for a chance at a billion dollars? Somehow when the big dollar signs appear, human grasp of probability gets hazy, particularly the fact that one in a million (or, to be precise, 1 in 292,000,000) is pretty close to zero in a million.

With participation so high and tickets so easy to come by, lotteries have become part of the background of daily life in the United States. But it’s easy to forget how recent a cultural shift this has been.

The public acceptance of lotteries has ebbed and flowed since colonial days, when the Continental Congress established the first national lottery in 1776 as a fund-raising effort. Lotteries were at that time an accepted model for funding of churches and other public works, but they largely disappeared during the 19th-century era of protestant revivals that condemned all games of chance. After the (notoriously corrupt) Louisiana lottery was finally stamped out in 1895, there was no legal lottery until New Hampshire’s in 1963.

Put to a public vote, the sweepstakes proposal passed with a large majority, though not without resistance. In May 1963, John Gould wrote for the New York Times of New Hampshire holdouts who said the state had made the wrong choice. Gould attributed this to a puritan heritage and culture of self-reliance. Concord residents were particularly against the idea, with several concerned that it was “emphasizing decadence” and would be a bad influence on the youth. The mayor, Charles Campbell Davie, said he received lots of letters from locals condemning the lottery, although he had to reply that as a state matter it was outside his purview.

Unfortunately for the resisters, the New Hampshire lottery turned out to be a state revenue jackpot, and by 1964 the state’s education system had gained about $2.5 million from the scheme.

Convenience was not a word to describe that first New Hampshire lottery. Entrants paid $3 for an entry in the draw, tickets to which were sold at liquor stores across the state. Of the 330,000 tickets sold, 332 lucky winners were drawn, and their tickets each assigned the name of a racehorse nominated for a sweepstakes. The ticket holder whose horse won would receive $100,000. Second and third place won $50,000 and $25,000 respectively. The eight other ticket holders whose horses ran received $7,500, and the remaining 311 with a horse that didn’t run went home with $200. Not complicated enough? Winners also had to be notified by telegram, as federal law prevented any lottery information being sent through the mail.

Still, seeing the Granite State’s success, resistance to state lotteries elsewhere largely faded away. Today, only six states (Alabama, Alaska, Hawaii, Mississippi, Nevada and Utah) are without one. The formats have also proliferated, with most states offering multiple games and at least one draw every day. The expansion of lottery games has been a way for states to recoup the gaming revenue that has been dropping from other sources as horse racing, greyhounds and Jai alai dwindle and casinos compete against online gambling. Draw-type games have been augmented by the rise of instant games, the scratch off tickets that you can see in their Perspex dispensers on the counter of any convenience store.

For the big draw games, lotteries have also moved through different modes of selecting the random numbers for winners, most often featuring numbered ping-pong balls drawn from a drum or glass box. Players prefer the “authenticity” of the balls over a computer-generated result, and it adds to suspense and interest when the draw is televised. (The Powerball draw is shown live on television networks across the country.)

While it’s easy to think of players as dupes—lottery participation is negatively correlated with college attendance—lotteries also attract a lot of smart people, on both sides of the equation: designing new games, and figuring out how to improve their chances of winning.

Internet sites proliferate with both statistical geekery and obsessive conspiracy theories about how to win the lottery. A subject of much interest is the famous multiple winner Joan Ginther (4 wins each of over $2 million, on scratch lottery tickets in Texas). Ginther is a retired statistics professor, leading some to speculate that she figured out how the tickets were distributed and which batches were likely to contain the winner, but she has refused to speak publicly about her wins.

Of course, players have found other ways (of varying legality) to beat lottery odds. The most obvious is to rig the game in some way. In 1980, employees of the Pennsylvania lottery attempted to fix the draw by weighting some of the balls. The mastermind was the lottery’s announcer, Nick Perry — but, unfortunately for him and his associates, their ticket-buying raised suspicions, and the jig was up.

If you don’t have friends at the lottery who are willing to help you commit a felony, the next best option is to simply buy every number combination. However, even if you have the money, this is more difficult than it sounds. In 1992, an Australian gambling syndicate attempted to buy out the Virginia lottery. They were unable to buy every combination because tickets could not be printed in time – two million possible combinations remained unsold. (Luckily for them, they still won the $27 million jackpot – although the prize had to be shared among the 2,500 syndicate investors). More recently, a group of MIT students realized that the payout system of the Massachusetts lottery, which increased payouts at the lower levels of prizes during jackpot weeks, would allow them to be guaranteed a 20-30% return on their investments. Since they weren’t doing anything wrong, they were able to make quite a successful return. (This loophole has now been closed).

In short, you can be certain people are already figuring out how the new payout system of Powerball can be best played to their advantage.

And there will be some who believe that there are unseen forces of luck that decide the winners. It’s popularly claimed that you are more likely to be attacked by a shark than win the lottery. But depending on how you run the numbers, this isn’t necessarily true: Since 2010, 6 people in the US have died from an unprovoked shark attack. Eighty-seven have won a Powerball jackpot.

For your security, we've sent a confirmation email to the address you entered. Click the link to confirm your subscription and begin receiving our newsletters. If you don't get the confirmation within 10 minutes, please check your spam folder.
Most Popular on TIME
1
World's Longest-Surviving Conjoined Twin Brothers Die at 68
2
Atlanta Shooting: 8-Year-Old Secoriea Turner Killed
3
Tom Hanks and Rita Wilson Discuss Their Very Different Reactions to COVID-19 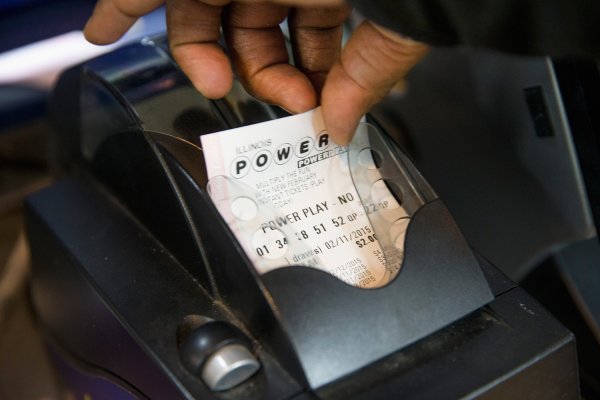