This isn’t the first time that Jimmy Fallon has stuffed celebrities into a phone booth for a trivia game, but it is the first time he’s done it with a contestant who barely fits in the booth. The host called on 7-foot-1-inch Shaquille O’Neal to go head-to-head with Hugh Jackman in a game of “Phone Booth” on Monday night’s episode of The Tonight Show.

Jackman and O’Neal are both given their own phone booths and told to get inside. If either contestant answers a trivia question incorrectly or their opponent gets a question right, another person will be added to the opposing player’s booth.

Both the actor and the former NBA player answer their first question correctly, resulting in Jeopardy host Alex Trebek climbing in with Shaq while a member of the Blue Man Group joins Jackman. The game only gets crazier from there, with several other celebrities being forced to cram themselves into the crowded boxes.

The biggest takeaway from this segment? Shaq and Trebek definitely deserve their own buddy comedy. 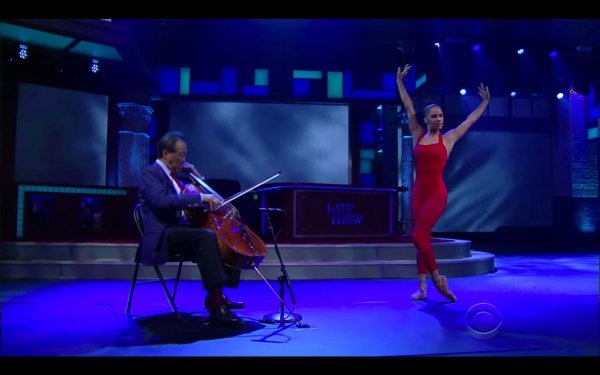 Watch Misty Copeland and Yo-Yo Ma Perform on The Late Show With Stephen Colbert
Next Up: Editor's Pick