European Council President Donald Tusk addresses the European Parliament during a debate on the results of the last informal European Council, in Strasbourg, France, Oct. 6, 2015.
Vincent Kessler—Reuters
By Denver Nicks

Up to 3 million additional refugees could flee the fighting in Syria, E.U. Council President Donald Tusk warned in remarks to European lawmakers Tuesday.

The wave of refugees could worsen a migration crisis that has put pressure on European border facilities and strained relations between EU member states. There are currently around 2 million refugees from Syria in Turkey.

“Today millions of potential refugees and migrants are dreaming about Europe,” Tusk said. He warned lawmakers that “the world around us does not intend to help Europe,” adding that some even “look with satisfaction at our troubles,” reports The New York Times.

Tusk slammed EU states that he said failed to honor the EU’s asylum rules saying, “we have to respect commonly agreed upon rules” or risk undermining “the essence of solidarity and our community.” He singled out Hungary, Italy, Slovakia and Greece, states on the periphery of the union that have seen the biggest influx of refugees.

Turkish President Recep Tayyip Erdogan has sought support in Europe for the establishment of a safe haven and no-fly zone in northern Syria, which, he says, is essential for reducing the flow of asylum seekers and ending the refugee crisis. 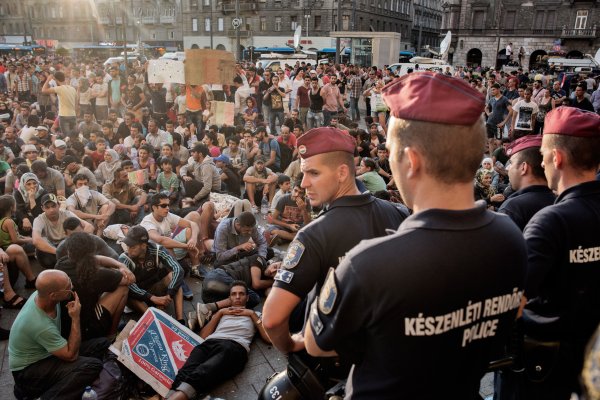 Half a Million Migrants Have Arrived in Europe Since 2015
Next Up: Editor's Pick