Reconstruction drawing of a Kimbetopsalis-simmonsae.
Sarah Shelley—University of Edinburgh
By Alexandra Sifferlin

Researchers have discovered the existence of a new, rat-like mammal that existed alongside dinosaurs, and even survived after them.

An University of Nebraska-Lincoln (UNL) undergraduate student, Carissa Raymond, discovered the fossil of the species which walked the earth some 65 million years ago.

Raymond discovered some peculiar black teeth during a fieldwork trip with UNL paleontologist Ross Secord and other students in the San Juan Basin in New Mexico. A UNL press release continues the story: “The teeth had cusps arranged in rows resembling kernels on an ear of corn or the teeth of a meat-tenderizing mallet.

“They were characteristic of multituberculate mammals, rodent-like creatures that lived with dinosaurs for more than 100 million years. They survived the dinosaur extinction only to die out about 40 million years ago.”

The species, named Kimbetopsalis simmonsae, was the first new multituberculate mammal (multiple rows of cusps on an animals’ teeth), to be discovered in the area in over 100 years. The Washington Post reports that the mammal grew from “tiny proportions” to about the size of a large beaver over 500,000 years — an extremely rapid growth, in terms of evolution.

‭“It’s rare for anybody to find one of these,” Thomas Williamson, a curator at the New Mexico Museum of Natural History and Science, said. “I wish I had found it.” 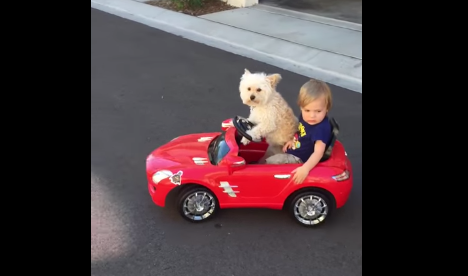 Watch a Dog Drive Around a Little Boy in a Tiny Car
Next Up: Editor's Pick