When Donald Trump backed out of an event last week with the U.S. Hispanic Chamber of Commerce, he inadvertently exposed major tensions simmering within the organization over how to deal with his candidacy.

In many ways, the fight is a microcosm of the divisions within the Hispanic community at large: should groups treat Trump like a demagogue threatening Latinos or a legitimate candidate entitled to equal treatment?

You could trace the fight back to Trump’s announcement in June, when he accused many undocumented Mexican immigrants of being “rapists.” That comment set the tone of his bombastic campaign and set off months of strain between Trump and Hispanics in the United States that only got worse as he rocketed up to first place in the polls.

Or you could look to the first day of September, when Javier Palomarez, CEO of the Hispanic Chamber, met privately with Trump and emerged from the meeting calling him “gracious” and “hospitable.” Palomarez may have been freelancing a little. He didn’t tell most other members of the Hispanic Chamber about the meeting beforehand, and afterward he and Trump announced the Q&A on Oct. 8, which Trump later backed out of. (The Q&A was not unprecedented. Candidates such as Ted Cruz, Bernie Sanders and Jeb Bush have done similar events with the group.)

For Frank Garcia, New York state chairman of the Hispanic Chamber, the fight really began the following week in September, when a Trump security guard punched a Latino protester outside Trump Tower. “I was all right in the beginning with him speaking,” Garcia told TIME of Trump’s plans for the Q&A. “[But] when you assault one of our community members in New York—one of our advocates—then you’re assaulting all of us.”

Things started to get ugly at a meeting of chamber leaders in Houston on Sept. 20, BuzzFeed reports. By this point, Garcia, members of the 26 chapters of the Hispanic Chamber in New York, and representatives from other chapters like Texas had all been vocal about their opposition to Trump’s event with the group.

Sam Guzman, chairman of the Texas chapter, explained why he was against Trump’s visit along with Garcia: “This is not like any other candidate,” he said. “This is a candidate who has gone out of his way to insult and degrade the Hispanic community. To sit down and try to work with him I think is a mistake. I think the message would have been better sent by saying, We’re not meeting with Trump because of what he has done and said about Hispanics. He went too far.”

Garcia says police were called to keep him out of the meeting in Houston so he couldn’t raise his objections to Trump. (Guzman says he didn’t arrive in Houston until later in the afternoon.) Garcia was eventually let in, where a video published by BuzzFeed shows a confrontation between him and Palomarez.

“We will meet with Donald Trump, the only person getting embarrassed is you,” Palomarez says to Garcia in the video. “I’m glad to give you the $100,” motioning to give Garcia back his membership dues.

“He is a president that’s paid by the Hispanic Chamber, he’s an employee, you can’t do that to a member,” Garcia said of the incident. “So with all the stuff that happened that day at the Houston convention, that’s when the Spanish press started [reporting the incident] and was disturbed about it, because this is the same issue that happened to Jorge Ramos. He was kicked out for trying to ask a question.” (Ramos, a Mexican-American journalist, was removed from a Trump event in August after asking confrontational questions, then allowed back in.)

Now Garcia says he and his lawyer are considering suing the Hispanic Chamber for trying to take away his membership and bar him from the Houston event.

Palomarez, for his part, spoke to Latino USA defending his choice to invite Trump to speak. “Whether or not we should ignore certain candidates is not the question here,” he said. “Whether we should ignore Donald Trump or anyone else is not the question. The real question is: Should we allow any candidate, including Donald Trump, to ignore us? … The idea here is that we will engage all candidates, no matter how strongly we disagree or how distasteful their views are.”

For the moment, the contest within the Hispanic Chamber over Trump’s visit has been rendered moot. Trump backed out of the event the week before it was due to be held because he was worried he would be “put on trial” during the question and answer session, according to a statement by the organization.

But more broadly, the dissenting members of the organization and the Hispanic community at large are still struggling to figure out how to deal with Trump going forward.

There are those who agree with Palomarez, that the best defense against Trump is subjecting him to the scrutiny and tough questions that a legitimate candidate must face. Daniel Garza, executive director of the Koch-backed Libre Initiative, is of that camp.

“It is part of our electoral process,” Garza said of Trump’s candidacy. “I wouldn’t encourage anybody to censor anybody. He’ll be judged on the merits of his ideas and his narrative. If people reject that, fine. Let the American people decide. No one organization gets to decide for any Latino or any group of Latinos if we hear from him or not.”

But there are also those who agree with Garcia, that Trump is a menace who should not be given any more platforms to espouse his views. Samuel Rodriguez, president of the National Hispanic Christian Leadership Conference, is on that side of the divide.

“Right now, he’s not a candidate,” Rodriguez said of Trump. “He’s a demagogue who is using the Latino and immigrant community as a steppingstone and sacrificing this community on the altar of political expediency.”

Rodriguez thinks that until Trump has a “mea culpa” moment where he apologizes for some of his comments, the best strategy for the Hispanic community will be to disengage. “The Latino community should continue to consider Donald Trump an entertainer who is attempting to broaden his brand,” Rodriguez said.

Carmen Hernandez, president of the New York LGBTQS Chamber, agrees with Rodriguez about how to deal with Trump. “We shouldn’t give him the time of day,” she said. “Period.” 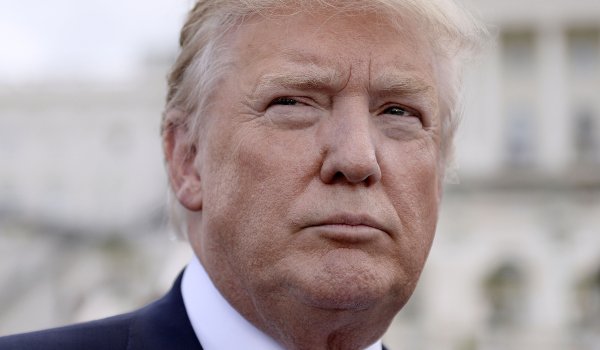