Relatives and family members of Mohammad Akhlaq, who was killed by a mob, mourn his death at Bisara village in Uttar Pradesh, India, on Oct. 2, 2015
Anindito Mukherjee—Reuters
By Rishi Iyengar

The killing of a Muslim man from a village in northern India by an irate mob who suspected him of having consumed beef has set off a political blame game in the South Asian nation, while also sparking fears of rising Hindu nationalism under Prime Minister Narendra Modi.

Several leaders from the Bharatiya Janata Party (BJP), which Modi belongs to, have made statements ranging from implicit justification to outright support for the perpetrators. Local member of parliament Mahesh Sharma — also the country’s Culture Minister — called the lynching an “accident,” while another politician named Sangeet Som — accused of inciting communal riots in a nearby town that killed 65 people in 2013 — warned of a “befitting reply” if the suspects arrested for the execution were prosecuted, according to Reuters.

“How can the leader call my husband’s murder an accident?” the victim’s widow, also injured during the incident, said to Reuters in response to Sharma’s comments. “I don’t think the minister knows the difference between an accident and murder.”

Mohammad Akhlaq, 50, was beaten to death a week ago at his home in Bisara village in the state of Uttar Pradesh, after the priest at a local Hindu temple announced on a loudspeaker that his family had slaughtered a calf and kept the meat in their fridge to be eaten later. Akhlaq and his 22-year-old son — currently in critical condition at a hospital after undergoing two brain surgeries — were attacked by the crowd with bricks, his daughter told local media. She also alleged that she was molested and her elderly grandmother was hit in the face.

Modi’s own silence on the incident has added fuel to criticism that hard-line conservative groups are being allowed to indulge in “moral policing” against India’s minorities, often taking the law into their own hands. The consumption of beef — cows are sacred to India’s Hindu majority — has long been a contentious issue in the country and is already restricted in many states, but was thrust into the spotlight earlier this year when the major western state of Maharashtra announced stricter laws prohibiting the sale and consumption of all varieties of bovine meat.

Several leaders from the BJP and Rashtriya Swayamsevak Sangh (RSS), a Hindu nationalist organization that serves as the ruling party’s ideological guiding force, have since increasingly called for a sweeping nationwide ban on beef and stricter punishments for its consumption. Many say such policies unfairly target the country’s Muslim and Christian minorities, however, and are being used to enforce the BJP’s Hindu nationalist agenda under Modi despite India’s official status as a secular nation.

Further evidence of the ruling party’s support for the crackdown against beef consumption emerged on Monday, when the Indian Express newspaper reported that eight of the 11 suspects that have been arrested for Akhlaq’s murder are related to local BJP worker Sanjay Rana. Rana’s son and several nephews are among those taken into custody, while a member of an Indian paramilitary force called the Home Guard, who allegedly forced the priest to make the announcement against Akhlaq, is also apparently his relative.

While Rana confirmed that seven of the eight accused — ranging in age from 18 to 22 — are members of his family and the remaining three are neighbors, he said he was being unfairly targeted because he argued with police who had arrived on the scene. He also told local news channel NDTV that he had been implicated in a “conspiracy.”

Akhlaq’s widow Ikraman, meanwhile, could only express shock and sadness.

“Even now I can’t believe that my Hindu neighbors killed my husband,” she told Reuters. “My neighbors were like my extended family.” 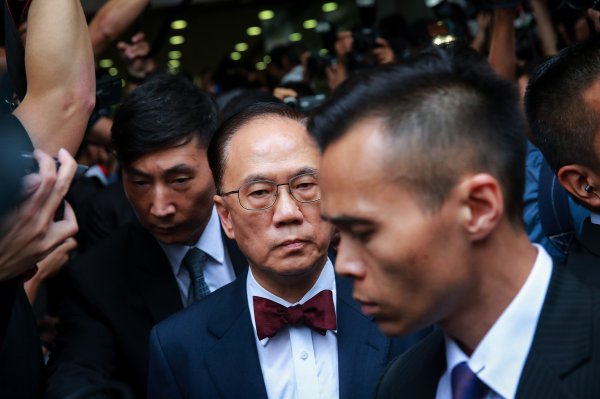