Syrian President Bashar Assad reacts as he speaks to the media with his Turkish counterpart Abdullah Gul, not seen, following their talks at the Ottoman-era Ciragan Palace, in Istanbul, on May 8, 2010
Ibrahim Usta—AP
By Joanna Plucinska

Syria’s President Bashar Assad insisted that Russia’s daily air strikes in Syria are essential to securing peace in the Middle East during a Sunday interview on Iranian TV.

“The alliance between Russia, Syria, Iraq and Iran must succeed or else the whole region will be destroyed,” Assad told Khabar, an Iranian TV network. “The chances of success for this coalition are great.”

Russia launched air strikes in Syria on Wednesday, insisting that, like the U.S. coalition forces, they were targeting forces loyal to the Islamic State of Iraq and Greater Syria (ISIS).

“The Russian aviation group is continuing to ramp up air strikes using high-precision missiles against the ISIS facilities in Syria,” Russia’s Defense Ministry said, according to Agence France-Presse.

However, Western leaders, including U.S. President Barack Obama and U.K. Prime Minister David Cameron, have criticized Russia for targeting moderate rebel groups in the west of the country instead of ISIS strongholds in the northeast.

They’ve also expressed worries that the Russian air strikes will bring further instability to the region. The Moscow government has since insisted that there is little difference between the rebel groups of Syria.

Dmitri Peskov, the Kremlin’s primary spokesperson, said in a TV interview on Saturday that Russian President Vladimir Putin had “asked what the difference between the moderate opposition and the immoderate opposition is,” in meetings with French and German leaders on Friday, AFP reports.

While Russia refutes that the air raids have caused civilian casualties, reports from opposition groups on the ground suggest otherwise. 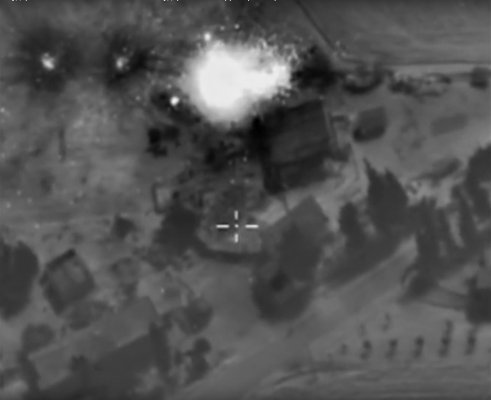