Hillary Clinton will announce a new plan Monday to expand gun control laws in the wake of the deadly shooting at a community college in Oregon last week.

Clinton’s proposals would extend background checks on weapons purchases and increase legal culpability for gun manufacturers, according a preview provided by a campaign aide. Under Clinton’s plan, all high-volume vendors, including those at gun shows and on the Internet, would be required to comply with background checks. As president, Clinton would take executive action to tighten those loopholes if legislation stalls in Congress.

She would also support laws to prohibit domestic abusers in dating relationships from purchasing guns, and close the so-called “Charleston Loophole,” which allows a gun sale to take place without a background check if the check is not completed within three days. Finally, she would repeal laws that protect negligent gun makers from legal culpability.

Clinton will announce her plan on Monday, three days after pledging to take on the National Rifle Association and gun lobbies after the Oregon shooting. “This is not just tragic. We don’t just need to pray for people. We need to act and we need to build a movement,” Clinton said on Friday at a campaign event in Florida.

Former Maryland Gov. Martin O’Malley this weekend called on Clinton and Vermont Sen. Bernie Sanders to support a federal gun licensing and fingerprinting law, as well as a rule that made illegal gun trafficking a federal crime, among other measures. As Maryland governor, O’Malley helped push through some of the strictest gun laws in the country.

Gun control is one of the few issues in which Clinton has a more left-leaning record than Sanders, who hails from a hunting state with a large contingent of gun owners.

Sanders voted in 2005 in favor of prohibiting product misuse lawsuits on gun manufacturers, a law that Clinton voted against and wants to overturn now. Their respective views on guns are likely to be an issue in the first Democratic Presidential debate on Oct. 13 in Las Vegas. 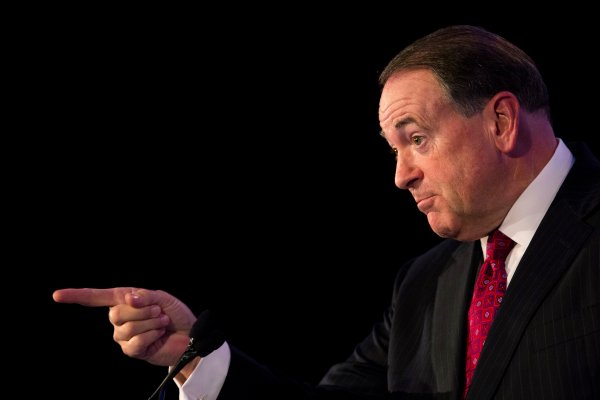 Why Mike Huckabee Picked a Fight With Frito-Lay Over Gay Doritos
Next Up: Editor's Pick