Russia’s Unguided Weapons in Syria Could Ricochet on Moscow

The Syrian air force has been bombing anti-government rebels—as well as innocent civilians—with crude barrel bombs that rarely hit their targets. But the arrival of the Russian air force isn’t bringing a big increase in accuracy. Their bombing technology is a generation behind American weapons, and that could end up pinning a target on the back of every Russian soldier in Syria as well as back home.

The U.S. has claimed that the Russian air strikes that began this week appear aimed at Syrian rebel forces fighting to topple President Bashar Assad instead of the Islamic State in Syria and Greater Iraq. But they may not be very effective. Video released by the Russians—and U.S. intelligence reports—indicate the bombs being dropped are unguided, and that at least some of them are going astray.

That could lead to big problems for the Russians, according to Lieut. General Bob Otto, the Air Force’s deputy chief of staff for intelligence, surveillance and reconnaissance. “Those aren’t precision weapons,” Otto said Thursday of the Russian bombs. “We can tell what’s hanging off the airplane” via intelligence imagery, he said. They’re “dumb” bombs, guided to their targets only by gravity and the plane’s position and velocity when they’re released. Such weapons are notoriously inaccurate.

The U.S. has known for years—especially following hundreds of drones strikes in Pakistan—that ill-aimed weapons can cause more problems than they solve. “We believe if you inadvertently kill innocent men, women and children, then there’s a backlash from that,” Otto said. “We might kill three and create 10 terrorists. It really goes back to the question of are we killing more than were making?”

The U.S. and its allies have been using smart bombs against ISIS targets, and won’t attack them unless it believes there is a low chance of civilian casualties. That’s kept the number of bombing missions low, Otto added.

The U.S. and its allies have been attacking ISIS targets that “are the most precise in the history of warfare,” Army Colonel Steve Warren said Thursday from Baghdad, where he is a spokesman for the anti-ISIS campaign. “The amount of care that we have taken to preserve civilian life, to preserve civilian infrastructure, is unprecedented.”

The Syrians have been using barrel bombs, which are literally barrels crammed with high explosives and shrapnel that cost as little as $200 apiece. They’re the perfect weapon for sowing terror from the skies, and so inaccurate that some international groups argue their use constitutes war crimes. But they’re perfect for an embattled dictator with dwindling weapons stockpiles—and a still-flying air force.

Russia’s munitions lag so far behind those of Western militaries because the Soviet Union fell apart at the same time as smart-bomb technologies were taking off. Since the end of the Soviet Union in 1991, the Russian military has invested relatively few rubles in improving the accuracy of their air-delivered weapons, Pentagon officials say.

Videos released in recent days by the Russian military appear to show some of their weapons missing their targets. This excerpt, apparently shot from a drone overhead, appears to show cluster bombs—weapons that are designed to wipe out infantry formations—hitting Syrian soil, followed by a volley of larger detonations, most of which seem to miss.

Russia has faced Islamic terrorist in the past, largely from Chechen separatists who have killed hundreds with bomb blasts in apartment buildings and market places. The Internet is littered with videos of Muslims killing Russians, and Russians killing Muslims. Moscow’s actions now underway in Syria are likely to add to the collection. 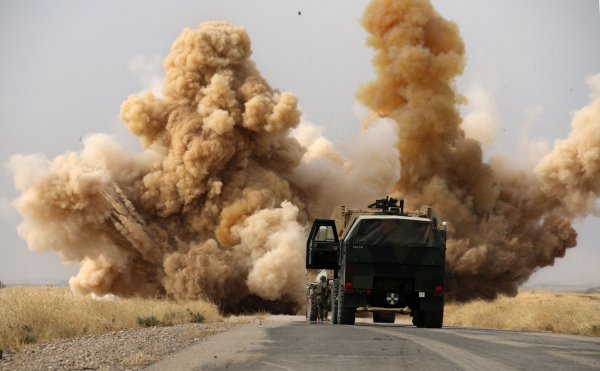 Why the U.S. Military Isn’t Winning
Next Up: Editor's Pick