An Original SNL Writer Explains How the Show Came to Be

The first episode of Saturday Night Live, which aired exactly 40 years ago this weekend, on Oct. 11, 1975, is now an iconic bit of television, from George Carlin’s monologue to Andy Kaufman’s “Mighty Mouse” routine. But it wasn’t really the same show as the Saturday Night Live that millions of fans tuned into when it returned for a new season last weekend.

“I don’t think the show was what it became until probably Christmas of that year,” recalls Anne Beatts, one of the show’s original writers and an Emmy winner for her work there. “How the show came to be was in a sort of organic way.”

She traces that organic development—and the show’s eventual success—to the fact that creator Lorne Michaels started with the writers, rather than the talent. And, though he had a memo that he’d drafted for the network describing what the show would be, Beatts says that he never showed it to the writers when they started working. Rather, he let them decide what this new kind of sketch show would look like. At the beginning, says Beatts, that meant some failures: she recalls the first episode as having too many musical numbers and not enough sketches, and reviewers at the time agreed. But, within a few months, it was clear they were onto something. By February of 1976, TIME was declaring the new show, then called simply Saturday Night, “the season’s surprise hit” and NBC executives boasted advertisers were more interested in the program than anything the network had offered in 25 years.

“My friends kept on anticipating it would get canceled,” Beatts says. “They thought it was too hip for TV, that all the good stuff always gets canceled—which is funny after 40 years.”

For Beatts, who had been the first woman to be a Contributing Editor at the National Lampoon, the mystery of what SNL would be meant she almost didn’t take the job at all. Beatts didn’t know much about what the project, other than that it would be live, when she heard about it through a series of small-world connections: Marilyn Suzanne Miller, who also ended up as one of SNL’s original writers, had worked with Lorne Michaels before and was a fan of Michael O’Donoghue of the Lampoon, who was Beatts’ boyfriend at the time. Miller pushed Michaels to meet with O’Donoghue and, Beatts says, “Saturday Night Live proved to be a bit like the ark, where you had to go on two by two.” Michaels’ own wife at the time, Rosie Shuster, was also a writer, and the production designers were a couple too.

Beatts was four hours late for her interview with Michaels (“I was getting my first perm—perms were in then—and it didn’t take, so they were redoing it”) but, even though she was offered the job despite her tardiness, she was hesitant to take it. Beatts and the writer Deanne Stillman were working on a book, Titters, which would be the first collection of humor by women, and she was worried she wouldn’t have enough time for Titters if she had a TV gig too. “It was sort of radical at the time,” she says. “In fact, it is even now.” (Comedy’s reputation for sexism in the 1970s was well earned, Beatts says, even though SNL’s three women writers and three in front of the camera was impressive for the time. Beatts, who now teaches at Chapman University, is currently working on a documentary about women in comedy with her producing partner Eve Brandstein.)

“Lorne basically got me to agree to take the job by lying to me,” Beatts says. Of course, by the time she figured out that SNL was really a full-time job, she was already in.

The writers weren’t the only ones who didn’t completely understand what they were getting into: on the Friday night before the first episode, Beatts says, Andy Kaufman announced during the rehearsal that he had to leave. The last train to Long Island was at 9:00 and he had to be on it. It took some convincing from Beatts—meaning that she told him he simply could not leave, reminding him that they were about to go live on national television—before he reluctantly agreed to see if his mother could come and get him later. (Years later, Beatts would learn from Kaufman’s brother that he actually could drive and had a car. “It was just, like, an Andy-ism,” she says.)

The network needed time to adjust, too: NBC wanted George Carlin to get a haircut and wear a suit and tie to do the opening monologue, Beatts says.

“The compromise was that he wore a suit jacket over a tee shirt,” Beatts remembers. “It took them a long while to get it. I don’t think they got it until the Emmys.”

It would have been pretty hard not to get it at that point. In the spring of 1976, the first season of SNL walked away with multiple Emmys in its category. Those wins were a double stroke of good fortune for Beatts: the weekend of the Emmys was when she and Stillman were turning Titters in to the publisher, who would have to decide whether or not to accept it—and, though they were not connected, the Emmy win helped push the book to a sale. Beatts would work at SNL until 1980, when she left to create the sitcom Square Pegs, and would also find the time to work on another volume of Titters, among her many other projects.

As for SNL, the rest was history. 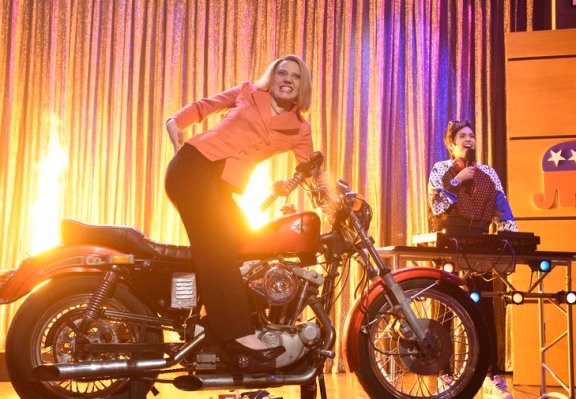