The 2016 Republican presidential race may turn into the most grueling campaign in two generations thanks to a series of rules and calendar changes instituted by the party in recent years.

The combination of a front-loaded calendar and the expansion of states splitting their delegates among candidates, means a nominee won’t be likely be known until the spring at the earliest, according to the Republican National Committee—and perhaps months later. If three or more candidates pick up a substantial share of the early delegates in the first month of voting, the race could go all the way to early June, if not the convention.

GOP state parties had until Oct. 1 to submit their delegate selection plans. The Republican Party gave TIME an exclusive look at what they entailed, providing the sharpest picture yet of what the next nine months of campaigning will look like.

Here’s your guide to the 2016 Republican Nomination:

How many delegates does each state get?

In addition to its three national party representatives, each state is awarded 10 delegates, plus three for each congressional district. Additional ‘bonus’ delegates are awarded for the share of the Republican vote in the previous presidential election and for electing Republican governors, Senators, Representatives, and legislatures. Territories are awarded a set number of delegates according to the party rules.

Who determines how each state awards its delegates?

Each state party sets its own rules in consultation with the Republican National Committee.

First off, the sheer number of candidates (15!). Second, the RNC moved to condense the calendar, keeping the Iowa caucuses from encroaching on New Years and moving the convention into July, and the last primaries to early June. The thinking was this would prevent the drawn-out primary fight that weakened Mitt Romney last cycle. Additionally, more states moved their primaries and caucuses into early March in an effort to play a more significant role in the nominating process, and thereby receive more attention from candidates. But all states voting before March 15 must award their delegates proportionally (though each state interprets that to their own liking), a measure instituted by the RNC to keep the race competitive into March.

What does that mean?

The 2016 primary calendar is technically shorter, but more importantly, it will be way more intense than the 2012 race.

So, when will there be a nominee?

That depends. Senior RNC officials will only say they predict the race being decided sometime in the spring, but many Republican operatives believe that a nominee won’t be determined until May or perhaps later. The concern is that with so many delegates up for grabs on a proportional basis—more than in any other cycle—that it will take longer for any one candidate to get the requisite number.

You mean a contested convention?

That’s still very unlikely, but for all the reasons above is more likely to happen this year than at any point in recent memory.

It sure is exciting to game out. If no candidate secures the required number of delegates by the first ballot in Cleveland (through a combination of bound and unbound delegates), all bets are off, as most states release their pledged delegates at that point.

What is a bound (unbound) delegate?

A bound delegate is a person whose vote will be counted for the candidate they are pledged to regardless of what they actually do at the convention. Unbound delegates may be pledged by personal statements or even state law, but according to RNC rules, may cast their vote for anyone at the convention. Many members of the RNC are unbound by their state rules.

How are delegates bound? The RNC has instituted a new rule requiring states that have ‘presidential preference votes’ like primaries and caucuses to bind their delegates in accordance with the outcome of the voting. Because, democracy.

What about Rule 40? This obscure rule passed to prevent Paul from being nominated on the convention floor in 2012, requires that candidates win a majority of eight delegations to be entered into nomination and have their delegates counted. It is almost certain to be amended in the week leading up to the GOP convention, depending on circumstances. (For instance, the minimum could move higher, in the case of a clear nominee, or lower, if there’s a contested convention.)

Can you give me a detailed breakdown of the official calendar, including how each state will award its delegates? Yes. Read on. . .

These are the four “carve out” states that the Republican National Committee has permitted to vote in February. Delegates will be split among the candidates.

Also known as the ‘SEC Primary,’ more delegates are bound on this day than any other in the primary race, all by some form of proportional allocation.** Many of the states are deeply conservative, and are being eyed by candidates appealing to such voters as an opportunity to build momentum. But there will be plenty of opportunities for more moderate candidates to come away with delegates, and maybe some victories too.

This is the first day that states may begin to award delegates on a winner-take-all basis and where favorite sons are looking to score big. It’s also the date at which a majority (56%) of delegates will have been already bound—an important milestone that was reached nearly a month later in 2012.

After a month of intense voting, the calendar slows with just 134 delegates bound over the course of a month. This could sap candidates’ momentum, either elongating a close race for the nomination or forcing underperforming and underfunded candidates from the race before the home stretch.

More moderate Republicans have an opportunity to be heard at a critical juncture.

The final primary day, with a large crop of delegates up for grabs.

*Figure may increase slightly depending on outcome of Kentucky, Louisiana, and Mississippi gubernatorial races and legislative races in Louisiana, Mississippi, New Jersey, and Virginia.

**Some proportional allocations have been simplified for clarity. 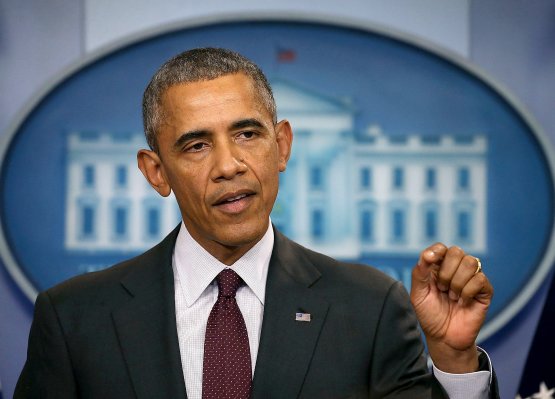 Transcript: Read the Full Text of Obama's Statement on the Shooting in Oregon
Next Up: Editor's Pick