Putin and Obama discussed Syria at the U.N., meeting formally for the first time since 2013.
Kevin Lamarque—Reuters
By Marvin Kalb

In Vladimir Putin’s world, it is only a short flight from Ukraine to Syria, and in both war-torn countries his message is the same: Russia is back, and without its full participation, no solution to either crisis is possible.

That much was clear on Sept. 30, when Russia began carrying out air strikes in Syria, dropping bombs on the rebel-controlled city of Homs. Putin’s move, which came after weeks of Russian military buildup at a base in northwestern Syria, will almost certainly prolong and escalate the country’s four-year-old civil war. But it was also the latest step in Russia’s journey from the national humiliation caused by the 1991 breakup of the Soviet Union to global recognition as a resurgent power. Putin cannot boast of Russia’s cultural or economic achievements (there have been none to boast of), but he has invested billions in modernizing Russia’s military-industrial complex–power that he has used to achieve his political objectives.

And this he has done with an almost reckless abandon. First in Ukraine, where he annexed Crimea and instigated a successful pro-Russian rebellion in the southeast, and now in Syria, where he is increasing Russian influence and prestige in the Middle East–and by comparison, shrinking America’s.

Putin’s influence was on full display at the U.N. General Assembly, which he attended for the first time in 10 years. Putin wanted to force President Barack Obama, who would also be at the U.N., to join him for a controversial summit to discuss and legitimize the topic of the day: Putin’s sudden and vague proposal for peace in Syria. In his speech on Sept. 28, he all but taunted the West for failing to stop ISIS or the war in Syria. “It’s not about Russia’s ambitions but recognition of the fact that we can no longer tolerate the current state of affairs in the world,” he said.

Within two days Putin acted, using not only words but military force. He had the upper chamber of the Russian parliament approve the use of force in support of Syrian President Bashar Assad, a longtime ally. Sergei Ivanov, Putin’s chief of staff, stressed that Russia was not opening the door to the use of combat troops on the ground in Syria. “We’re talking exclusively about operations of Russia’s air force,” he said. “As our President has already said, the use of armed forces on the ground theater of military operations is excluded.” But Putin could always change his mind.

Meanwhile, Putin has seized the diplomatic initiative, fashioning an important intelligence-sharing operation with Iraq, Iran and Syria that effectively leaves Washington in the cold. He was at the U.N. for all of seven hours, but he turned diplomacy on Syria on its head. Just as he stunned the world in March 2014 with his seizure of Crimea, he has now captured everyone’s attention on Syria. He used the U.N. to spotlight his peace proposal, which includes keeping his client Assad in power for the foreseeable future.

Obama, on numerous occasions, has demanded Assad’s immediate abdication. It’s now clear that won’t happen–a reality Obama essentially acknowledged in his own U.N. speech when he called instead for a “managed transition away from Assad.” It seems no peace plan for Syria can be negotiated that does not start with Putin’s, and none can be finalized without his approval. It is Putin, not Obama, who suddenly appears to be the peacemaker.

By focusing on Syria, by proving once again that military power can buy diplomatic and political advantage, Putin has forced Ukraine off the front page. His not so subtle signal to Western Europe, currently overwhelmed by the flood of migrating refugees, is that only he can end the war in Syria and only by ending the war in Syria can the human flood be stopped. And if Putin actually does manage to reduce the level of conflict in Syria, he argues, is Russia not entitled to an end to Western sanctions over Ukraine, sanctions he has repeatedly labeled “illegal” in any case?

Putin is no statesman–he is a dedicated Russian nationalist whose country is hurting because of Western sanctions and the fall in world oil prices. More than anything, Putin wants to retain his hold on power. He can’t do anything about cheap oil, but he believes he may be able to do something about Syria. It’s too soon to know whether he will get his way in the Syrian conflict, an ongoing catastrophe that has resisted foreign intentions both good and bad for a long time. Yet while Putin may be on the wrong side of history, for now he’s playing his cards like a master, albeit one with a narrow, selfish, nationalistic focus.

Kalb, senior adviser to the Pulitzer Center and senior fellow at the Brookings Institution, is the author of Imperial Gamble: Putin, Ukraine and the New Cold War 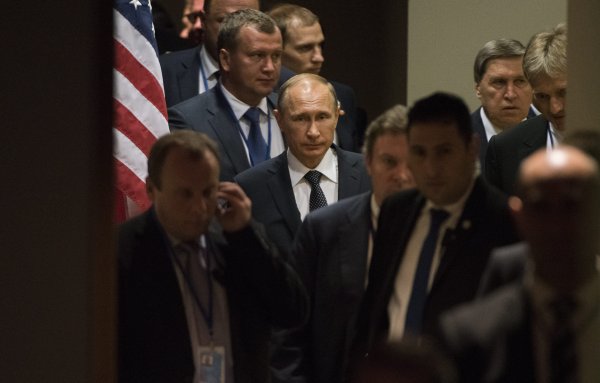 Russia Begins Airstrikes in Syria
Next Up: Editor's Pick