Why State Campaign Ads Are Getting Nastier

U.S. Sen. David Vitter, a Republican candidate for governor of Louisiana, would like voters to forget his past connection to a notorious prostitution ring.

But there’s a new political group in the Pelican State that isn’t going to let that happen.

“A New Orleans prostitute says Vitter was a regular,” say TV ads sponsored by the Louisiana Water Coalition, a group backed by a law firm that battles oil and gas companies. “We can do better than Vitter.”

Such political groups, independent from the candidates or political parties usually active on the airwaves, are playing a much larger role in state elections than a year ago, a Center for Public Integrity analysis of television advertising data shows.

So far this year, independent groups account for roughly 23 percent of TV ad dollars spent in the seven states with major races. That’s more than the 15 percent of spending that such groups had in a similar time period in 2014 races, or the nearly 19 percent of spending at this point in 2011 when voters in those states last had comparable elections.

In total, as of Sept. 28, an estimated $22.1 million has been spent airing state-level political ads on broadcast TV in those states, with roughly $5.1 million of it paid for by such independent political groups, according to a Center for Public Integrity analysis of data from media tracking firm Kantar Media/CMAG.

The firm monitors 211 media markets around the country and offers a widely accepted estimate of the money spent to air each spot. The figures do not include ads for radio, the Internet, direct mail or TV ads that aired on local cable systems. The estimates also do not include the cost of making the ads.

Though this year’s races are often drowned out by the circus surrounding the 2016 presidential candidates, the growing role of independent political groups in state races tells a broader tale of their influence up and down the ballot, from governors’ races to state senate elections.

Able to do the political mudslinging that candidates themselves typically try to avoid, independent groups are airing heated television attacks on candidates for governor in Louisiana and Kentucky. A conservative Arizona group is targeting attorneys general in Louisiana and Mississippi. In an April vote in Wisconsin, a liberal group helped sink a judge’s bid to join the state’s Supreme Court. Independent groups are also airing ads supporting candidates in the races for Louisiana’s education board and the New Jersey Assembly.

The door opened for such independent groups to spend more on election ads after the U.S. Supreme Court’s 2010 Citizens United ruling and related cases said nonprofits, corporations and labor unions could spend unlimited sums to convince voters to elect candidates. Dozens of states had to change their campaign finance rules to align with the court’s decision.

Just last year, a judge struck down a Louisiana law that capped donations to such independent political groups, paving the way for the Louisiana Water Coalition and others to raise unlimited funds.

With outside groups playing a larger role in state elections, voters may not know who’s behind the most vitriolic election ads they see. Some of the groups do not have to disclose their donors. Some use alternate names that obscure their identities.

Read More: What’s at Stake in the 2015 Elections

Some of the outsiders running ads are true outsiders, groups coming from out of state with cash from donors around the country. They have national reach and national agendas.

In Kentucky, where Democratic Gov. Steve Beshear has served the maximum two terms, Republicans and Democrats are battling to win the loyalties of voters who have historically preferred to send Democrats to the state’s highest offices but who have voted for the GOP in the last four presidential contests.

The high stakes have led to an estimated $9 million spent to air election ads in the race so far, with independent groups spending at least $3.3 million of that.

At least seven groups have joined the fray, but among the biggest spenders are the Republican Governors Association and the Democratic Governors Association, both of which jumped in under different names after the state’s spring primary. The Washington, D.C.-based groups each push to elect governors of their party in as many states as possible.

A group called Putting Kentucky First, created by the Republican Governors Association, initially released a stream of ads labeling the Democratic nominee for governor, Attorney General Jack Conway, as an “Obama liberal” who is “putting Obama first and Kentucky Last.” It spent more than $1 million but has since said it is pulling back.

Kentucky Family Values, funded largely by the Democratic Governors Association and unions, spent an estimated $834,000 and slammed Republican Matt Bevin for not releasing his tax returns as Conway did, among other things.

“What else is Matt Bevin hiding?” the ad asks. “We can’t trust him to be for us.”

And Americans for Prosperity, a national nonprofit backed by Republican mega-donors Charles and David Koch, took to local cable on Sept. 1 to attack Conway, a spokesman for the group said.

A minor player in the 2014 Republican primary for Arizona attorney general is expanding its reach nationally, spreading its messages to Mississippi and Louisiana and demonstrating how even a small outside group can wield major influence in faraway races.

The group once known as the Arizona Public Integrity Alliance, a nonprofit that is not required to disclose its donors, has dropped the Arizona from its name but kept its eyes on attorneys general.

It spent an estimated $49,000 on ads attacking Mississippi Attorney General Jim Hood, who is the highest-ranking elected Democrat in state government and faces a re-election battle in November. That’s less than a fourth of what either candidate has spent, but still the ads are making news.

“When Mississippi took on Obamacare, Hood sat on the sideline,” the ad says. “And while Obama’s EPA pushes new regulations to increase your electric bill, Hood fumbles.”

Hood’s campaign called the group’s ads “false” and released its own TV messages suggesting Hood’s opponent was behind the independent group.

“Obviously it’s disturbing that a secret out-of-state group would place such a huge buy on TV in Mississippi,” said Jonathan Compretta, Hood’s campaign manager. “This is a lot of money to spend.”

“It’s the same old politics that held Louisiana back,” say the ads, which accuse Caldwell of hiring expensive lawyers who also gave to his campaigns. “Stop the Buddy system.”

A spokesman for Caldwell said in an email that the attorney general hired all his legal help in accordance with state law.

Public Integrity Alliance’s president, Tyler Montague, said the group decided to get involved in other states after unnamed activists asked for its help. And though he won’t disclose his donors, citing fear of retaliation, Montague said his group is trying to shed light on corruption.

“We’re not in the shadows,” he said. “We see ourselves as kind of guardians and watchdogs.”

He said the group may jump into races in more states this election season.

Some groups are homegrown, though voters watching their acrimonious ads still may not know who’s behind them.

Louisiana Water Coalition, the political action committee active in the governor’s race there, began running the ads about Vitter just days after it formed last month.

When the TV spots began running, political players in the state weren’t sure who was behind the group. Paperwork later filed with the state said a Baton Rouge law firm gave the group $600,000 in contributions and another $500,000 loan. The group spent an estimated $221,000 to air the ads through Sept. 28.

The firm, Talbot, Carmouche & Marcello, did not respond to requests for comment. The firm is known for its class-action lawsuits against energy companies for environmental damage.

The ads touch on a sore spot for Vitter. He was re-elected to the U.S. Senate in 2010 after the prostitution scandal but still avoids questions on the topic. In 2007, he acknowledged his phone number was included in the records of the notorious “D.C. Madam” Deborah Jeane Palfrey and apologized for his “serious sin.”

Vitter sent an email to supporters saying the negative ads came from lawyers threatened by Vitter’s plans to combat settlements for “frivolous lawsuits.”

“These well-funded, liberal trial lawyers are the epitome of big-money special interests. They don’t care one bit about Louisiana and our future,” Vitter’s email said. “They just care about one thing — their bulging wallets.”

Louisiana Water Coalition isn’t the only independent group in the state going negative. A federal super PAC supporting Vitter, called the Fund for Louisiana’s Future, directed most of its estimated $567,000 worth of ad spending toward attacks on Vitter’s Republican opponents. And Louisiana Rising PAC, supporting one of those opponents, is firing back primarily with attack ads chastising Vitter for his past support for the Common Core education standards.

It’s common for ads sponsored by independent groups to be attack ads, according to the Center for Public Integrity’s analysis of ads. Nearly 80 percent of the dollars they spent so far went to ads that were entirely or somewhat negative against candidates.

“Negative ads insulate the campaign,” said Kenneth R. Mayer, a professor of political science at the University of Wisconsin-Madison. “It’s not the candidate going negative; it’s someone else.” 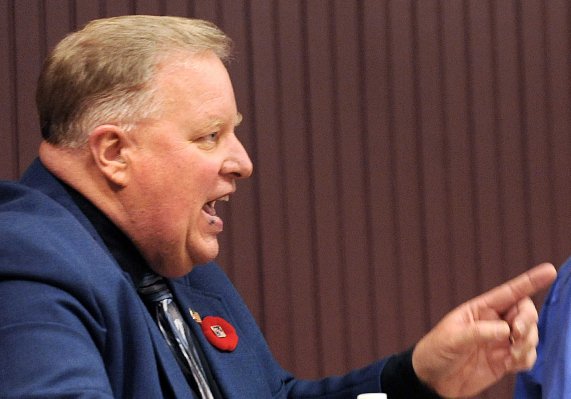