Prime Minister David Cameron is greeted by Jamaican Prime Minister Portia Simpson-Miller at her office, Jamaica House, in Kingston, on the first of a two day visit to the Caribbean on September 29, 2015
Stefan Rousseau—Press Association/AP Images
By Joanna Plucinska

U.K. Prime Minister David Cameron has rebuffed demands for his government to pay reparations and apologize for its role in the slave trade during a visit to Jamaica.

Speaking to the Caribbean nation’s Parliament on Wednesday, Cameron said slavery was “abhorrent in all its forms” but called for the two countries to “move on” and look to the future, reports the BBC.

“I do hope that, as friends who have gone through so much together since those darkest of times, we can move on from this painful legacy and continue to build for the future,” Cameron told Jamaican lawmakers, sparking head shakes from some in the audience, according to the Guardian.

Many on the island nation have joined the chorus of Caribbean countries calling for former colonial states to pay reparations for the damages inflicted by the slave trade. Cameron has said that he doesn’t think reparations are the best way to deal with this shameful legacy.

The U.K. emancipated its slaves in 1833, but, instead of paying reparations to victims of the slave trade, the government instead paid the modern-day equivalent of billions of dollars to slaveowners to compensate for lost revenue. Some national commissions in the Caribbean have since called for former slave-owning countries to pay trillions of dollars in reparations to rectify this, says the BBC.

Jamaicans were pleased with some of the commitments made this week by the U.K., however. Cameron’s office announced on Tuesday that it would offer $37.9 million in foreign aid to help Jamaica build a new prison to house Jamaicans prosecuted in the U.K. Cameron also said in his speech that Britain would donate almost $454 million to the Caribbean region to support infrastructure, the Guardian reports. 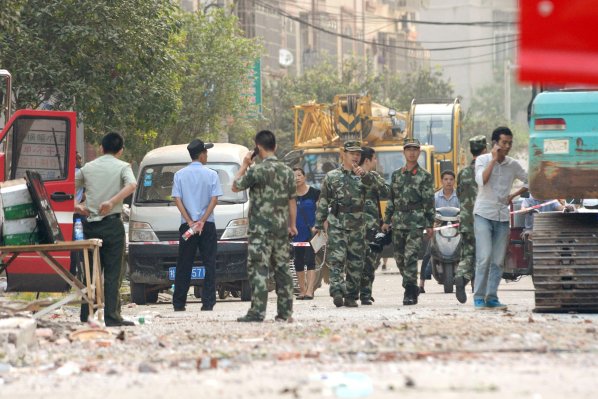 Blast Rocks Chinese City Morning After Wave of Bombings
Next Up: Editor's Pick