Ken Jeong: 'If It Wasn’t for Fresh Off the Boat, Dr. Ken Wouldn’t Be on the Air'

After years of playing raunchy, foul-mouthed and mean-spirited characters on shows like Community and in The Hangover films, Ken Jeong finally gets to be the nice guy. Or at least the nicer guy on his new ABC sitcom, Dr. Ken, which premieres Oct. 2, and draws from his previous life as a physician. “It’s a nice departure from crazy,” says Jeong, who in addition to starring is also a writer and executive producer for the series. “What I like about it is that I can still reference my comedic persona that I’ve cultivated over the past few years that I’ve really honed on Community and channel that into a much more grounded character.”

TIME caught up with Jeong during production to talk about turning his life into a sitcom, medically accurate television and sharing a network with Fresh Off the Boat.

TIME: Some of your best-known characters are pretty terrible people—

It’s great! It’s something that’s in my wheelhouse because I get to draw directly on my own background as a father of two daughters and being married for 11 years. It’s the most grounded character I’ve ever had to play, and it’s the complete opposite of Señor Chang on Community. It’s a nice departure from crazy. What I like about it is that I can still reference my comedic persona that I’ve cultivated over the past few years that I’ve really honed on Community and channel that into a much more grounded character. Community was the best on-the-job training one could ask for. There’s nothing I haven’t done or encountered. So the transition has been easy, to be honest.

Is this the first role you can actually watch with your kids?

What’s great is they come to some tapings of shows. They’re coming to our filming of our Halloween episode. Their favorite character is my character’s son. My girls are 8 years old—they’re fraternal twins—and to see them laugh at my character’s son’s jokes is pretty fulfilling.

Your character installs a daughter-tracking app to keep tabs on his teenage daughter. What’s the most helicopter-parent thing you’ve done?

I’m very overprotective, but I think I’m more of a worrier. In real life my wife prevents me from doing things like Daughter Tracker. I always worry about their futures. I’m not really a helicopter dad or tiger dad per se. If anything, I try to not do that, but I get anxious while I’m trying to be relaxed about raising my kids.

You were a real-life doctor before you got into acting full-time. What do medical shows get wrong that bugs you the most?

I honestly never watched a lot of medical shows, because the better they were, the more realistic they were. Twenty years ago, when ER first premiered, it was so good, but I had to stop watching, because it felt like I was watching work in medical school.

Comedy was always an escape for me, I just happened to be a doctor. I didn’t have a lot of medical show influences but I did have my own real life as a doctor for seven years that I drew on. I did envision more patient care and more patient cases when we first started thinking about a pilot over two years ago, but it really evolved. Because the cast is so talented and the characters are so well defined right now, we’ve jumped to be really about relationships between the characters. It’s almost like Seinfeld, when they started doing the stand-up interstitials. I almost envisioned the show being like that in many ways, with patient care jokes, and then eventually Seinfeld didn’t do those interstitials anymore. We’re already a few episodes in, and you’re not going to see a patient-of-the-week on Dr. Ken.

Dr. Ken is the rare medical show not set in a hospital. Is there humor to be found in our health care system?

Yeah! I worked at an HMO for seven years and definitely have been trying to satirize the tropes of being in managed care. Bad doctors, which I honestly rarely see, sometimes can be less incentivized to work hard because they’re just on salary. I was a very efficient doctor. I would get rewarded with a lot more patients. By the end of my medical career I had maybe 2,000 patients in my practice. Another colleague who had 1,400 was getting paid a lot more than I was because he was a 15-year veteran and I was only there for four or five years. What if Dr. Ken realized that and takes an hour between each patient? He doesn’t do it badly—he just socializes a lot more or watches Funny or Die videos. It’s kind of making fun of the inefficiencies that operate in an HMO system or any job where you’re just salaried.

I do think Dr. Ken at its heart is about a great doctor who’s a bit burned out. But even when I was a burned-out doctor, I was still happy and had a life outside of work. I’m not trying to be too trope-y. “Oh hey, how was your day honey?” “Oh, wow, it was really tough being an Asian-American doctor in a health maintenance organization in the San Fernando Valley!”

The first episode has a salient plot point about colon cancer. Is this the first sitcom to make people want to go and get colonoscopies?

You’re right—that turned out to be a teachable moment. First and foremost you’re entertaining, but with this project I have to entertain out of a platform of reality. I’m trying to mimic not just how a doctor would do it but how I would do it. Everything evolves from a real moment, and then I make it more fictionalized.

There aren’t that many Asian-American families on television—ABC is also home to Fresh Off the Boat. Does that factor into whether Dr. Ken will talk about race at all?

Yeah, I feel the show is about a second-generation Asian-American family on TV. The stakes are different and the conversations are different. Fresh Off the Boat is groundbreaking, and quite frankly if it wasn’t for Fresh Off the Boat, Dr. Ken wouldn’t be on the air. That show’s success really enabled Dr. Ken to have a shot. I love those guys.

They were so good in the development in the pilot. The head of comedy at ABC and I talked, and I was like, “Will this be a situation where we’re going to be compared to Fresh Off the Boat? You already have your hit show.” She promised me, “This is a Ken Jeong vehicle. We’re not going to compare you to anything like that.” And they never did. We’re just judged by the same metric that every sitcom on ABC is being judged by. Are you telling the right story? How are the jokes? Do they fit the story? They make us feel like this is every day for them. I think they’re the real trailblazers to be honest. I think Fresh Off the Boat’s success has incentivized everybody. I’m able to have my own vehicle. My story is so different from Eddie’s. My background is different, so they’re highlighting diversity within the Asian-American community. Even if I wasn’t on either show, they have three kids in that family, two in mine. You’re seeing five Asian-American kids on TV. That’s amazing. As an Asian-American kid, I saw zero. It’s pretty mind-blowing for me.

For me, I don’t go by, “Oh, am I going to do an ethnic storyline or not?” I go by what’s interesting to me right now. Sometimes it is an Asian storyline. My wife is Vietnamese and I’m Korean, and we’ll address some cultural issues, but we’ll do it very organically. We don’t do it the way white people want us to or think we do. That’s the worst. Any Asian-based theme is thoroughly vetted and managed with a fine-tooth comb by me. There’s not going to be a hackneyed dog joke. There’s never going to be a half-baked, stupid Asian bit, which would really bum me out because my life is not like that. I don’t talk like that. I’m in the writers’ room every day. After I get off the phone with you, I’m about to go into the writers’ room. I’m always the guardian of that.

In the pilot, if this were 20 years ago, you’d definitely be making an Asian-not-being-a-good-driver joke with Molly getting her driver’s license. That never happened on our pilot. I think we’re making a lot more quiet progress than whatever’s overtly recognized, which is just thrilling to me. 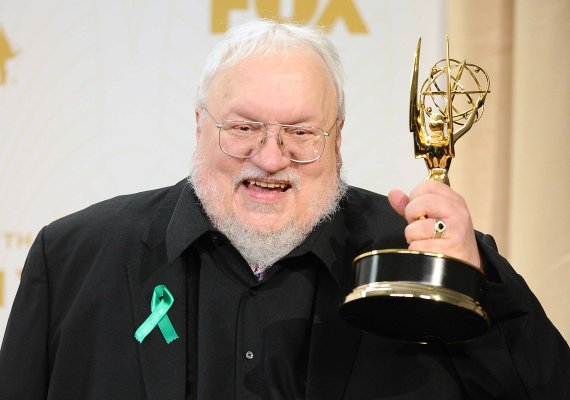 Why Game of Thrones Author George R.R. Martin Is Obsessed With Mars
Next Up: Editor's Pick