Washington Redskins NFL football helmet is on display in Pioneer Court to commemorate the NFL Draft 2015 in Chicago on April 30, 2015 in Chicago, Illinois.
Raymond Boyd—Getty Images
By Zeke J Miller

Former Florida Gov. Jeb Bush said this week that he doesn’t think the Washington Redskins should change their name, adding he doesn’t believe the pro football team’s name is offensive to Native Americans.

In recent years the team has faced pressure from local and national political leaders and activist groups to change the name, which they say is a derogatory term for Native Americans. Among them, President Obama, who called for changing it in an interview with the Associated Press. “If I were the owner of the team and I knew that there was a name of my team — even if it had a storied history — that was offending a sizable group of people, I’d think about changing it.”

Earlier this year, the Obama Administration blocked efforts to bring the team, which currently plays in Maryland, back to Washington, D.C. over concerns about the name.

Bush also said he “never quite understood what the big fuss was” over allegations that Patriots quarterback Tom Brady schemed to deflate footballs, and called on NFL Commissioner Roger Goodell to adopt a more transparent approach to leading the league.

“Over the past few weeks, Jeb Bush has shown a shocking disregard for America’s diverse society,” she added. “First, during an exchange about immigration from Latin America, he slurred American children born in this country to immigrants. Then, he clarified that the offensive term he used was, ‘frankly, more related to Asian people.’ Last week, he insulted African-Americans, implying that they only voted for Democrats because of ‘free stuff,’ and also said America should not have a multicultural society. So much for the Republican Party’s plan to appeal to minorities.”
The audio, courtesy of “The Arena” on “SiriusXM’s P.O.T.U.S. channel,” is below: 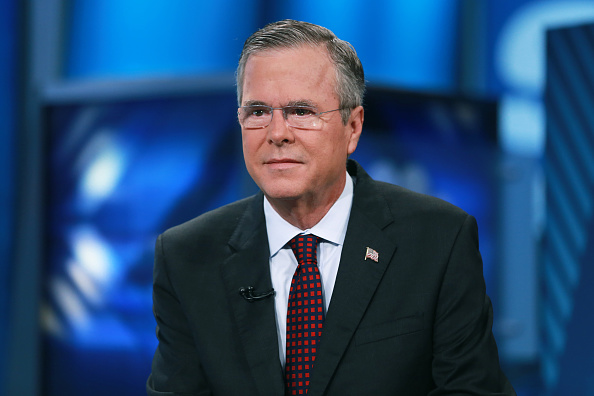