Burmese pro-democracy leader Aung San Suu Kyi smiles as she greets her supporters during her campaign in her constituency of Kawhmu township, outside Rangoon, on Sept. 21, 2015
Soe Zeya Tun—Reuters
By Charlie Campbell

Early next month Burma goes to the polls for what are shaping up to be its freest general elections for 25 years. The National League for Democracy (NLD) party of former political prisoner Aung San Suu Kyi, is poised to win a sizeable chunk of the 664 legislative seats. That would be a watershed moment for the former pariah nation, which has opened up politically and economically since democratic reforms were introduced three years ago.

However, significant problems remain. Suu Kyi, who is already a legislator, remains barred from becoming President, owing to her having married a Briton and having two sons who are U.K. citizens. These constitutional provisions were introduced by the former junta specifically to scupper the democracy icon’s political aspirations.

On Tuesday, the NLD announced it had filed a complaint against the country’s Union Election Commission regarding error-strewn voter lists, alleged defamation against Suu Kyi and perceived bias in favor of the military-backed Union Solidarity and Development Party (USDP).

All this will worry Washington. U.S. President Barack Obama has visited Burma twice in the past three years, championing the democratic transition and rolling back economic sanctions. This is not simply altruism: a free, prosperous Burma (officially now known as Myanmar) would prove a boon to his administration’s much-touted “rebalancing” to Asia. Conversely, any electoral skulduggery would prove embarrassing.

Here are seven factors that may prove decisive as the nation heads to the ballot box on Nov. 8.

1. NLD fumbling
On May 27, 1990, two years after mass student-led democracy protests shook the nation, largely free and fair polls saw the NLD secure 60% of the popular vote and 80% of parliamentary seats (392 out of 485). But the military refused to honor the result and Burma returned to suffocating dictatorship. In the interim, Suu Kyi spent 15 years under house arrest. The euphoria that accompanied the Nobel Laureate’s release and subsequent election to parliament in April 2012 by-elections, during which the NLD won 43 out of 45 contested seats, raised hopes that the party would romp home if the 2015 polls were similarly unfettered.

However, the mood has soured markedly since then. A controversial party list saw some potential big name candidates — including celebrated former political prisoners — shunned, and not a single Muslim among the 1,090 names, a testament to the party’s cowing to an increasingly vocal, hard-line Buddhist clique. Several senior party members have been expelled for questioning these decisions, prompting accusations of a lack of democracy within a pro-democracy party. Last week, the NLD leadership reportedly banned candidates from speaking to the media for three weeks. And even though Suu Kyi remains barred from the presidency, no alternative candidate has been proffered for the top job. “You are not voting for individuals,” Suu Kyi told supporters last month. “You are voting for change.” An election manifesto has finally been published but is sparse on how exactly this change is to be achieved.

2. USDP rumblings
Given the abuses suffered during more than half a century of dictatorship, few expected the USDP, staffed by former junta generals, to remain a political force once Burma made the transition to democracy. However, the party has recast itself as a bulwark against largely chimerical Islamic fundamentalism, aligning itself with prominent figures in the right-wing Buddhist clergy, and is far from spent.

At the same time, the party remains riven between the old and new guard, as illustrated by last month’s dramatic purge of Lower House Speaker Shwe Mann, the party chair and formerly No. 3–ranked junta general. Shwe Mann apparently paid a price for conciliatory overtures to Suu Kyi, which angered many conservative and military elements within his party.

Meanwhile, other key figures have also departed, including popular President’s Office Minister Aung Min, the government’s chief negotiator with ethnic armed groups, who is widely seen as a moderating force. Along with Soe Thein, an influential former Minister for Industry, Aung Min quit the USDP to run as an independent after being refused a safe seat.

3. Ma Ba Tha
Radical Buddhist nationalism is increasingly defining postreform Burma. The earlier 969 movement to boycott Muslim businesses and services has grown into the Association for the Protection of Race and Religion, commonly known by its Burmese acronym Ma Ba Tha. It crusades for Buddhist supremacy and Buddhist-Muslim apartheid. “It’s led by some of the biggest abbots in the country,” says David Mathieson, senior researcher on Burma for Human Rights Watch.

Ma Ba Tha is growing increasingly influential, claiming (although the facts are widely disputed) to have 250 chapters and 10 million members around the country. Ma Ba Tha remains close to the UDSP — party officials are not shy about donating large sums to the cause — and has aimed barbs at the NLD. Cognizant of the group’s swelling influence, even Suu Kyi has refused to outright condemn its unashamedly bigoted agenda.

4. Rohingya genocide
The plight of Burma’s million-strong Rohingya Muslim minority underscores the limits of reform. Deemed “one of the world’s most persecuted peoples” by the U.N., around 140,000 Rohingya currently fester in squalid displacement camps in western Arakan state after pogroms began flaring up in May 2012. Deprived of adequate food, shelter and medical supplies, thousands have attempted to flee in rickety boats, often cast adrift by people-smugglers.

During the last widely condemned elections in 2010, the central government cynically bestowed voting rights on the Rohingya, who expressed support for the USDP. But they only did this for the politically expedient goal of seeing off the challenge of the ethnic Rakhine parties, the Rohingya’s longtime foe. This even saw some Rohingya MPs in parliament.

This year, those voting rights have been stripped away and no Rohingya have been allowed to register as candidates. This has led to an “unparalleled tide of despair,” says Matthew Smith, founder of the Fortify Rights NGO, who has just returned from three weeks documenting the human-rights situation in Rakhine state. “People are planning to take to the seas again.” Sadly, the partly U.S.-funded Union Election Commission has not overturned the Rohingya’s state-level systematic disenfranchisement.

5. Ethnic unease
Burma boasts 135 official ethnicities — although the Rohingya were axed from this list in 1982, depriving them of even that bare minimum of recognition.

The nation’s seven main ethnic groups boast namesake states that share frontiers with Bangladesh, India, China, Laos and Thailand. Virtually since independence in 1948, these minorities — currently comprising a third of Burma’s 51 million population — have complained of persecution by the central government, which is dominated by the Bamar ethnic group. Aligned rebel militias have waged the world’s longest running civil war to seek greater autonomy. The Burmese military, in turn, has exploited the specter of Balkanization to maintain its grip on power.

Clashes continue unabated despite recent peace talks, particularly in Kachin and Shan states by the Sino-Burmese border. As a result, more than 300,000 people have been displaced since President Thein Sein took power and reforms began. This is in addition to the 140,000 refugees that languish in nine main camps across the Thai border, many having been there since the 1980s.

Sporadic violence entails the likely suspension of voting in constituencies where security cannot be guaranteed. Already marginalized communities thus feel excluded from the democratic transition. Frustration is building. “The local populations have more animosity towards the Tatmadaw [Burmese armed forces] now than we’ve seen in a very long time,” says Smith, “Elections are only going to increase tensions.”

At the same time, ethnic parties maintain largely cohesive support in their home states, and could team up to become a political force within the new parliament, perhaps striking a deal with the NLD, with which they share the goal of a federal state with power devolved to the regions. This would certainly worry military figures, who profit from exploiting jade, teak and other natural resources found in regional areas. But then it is the military that ultimately decides whether peace deals remain intact, and votes go ahead.

6. Economic faltering
Burma’s return to the international fold saw a rash of Western businesses jostling to exploit the nation’s cheap workforce, abundant natural resources and enviable geographical position between regional superpowers India and China. Although there have been certain cosmetic changes, such as shiny new cars on the streets of Rangoon, the rolling back of economic sanctions has not heralded the kind of resurgence many expected.

Professor Sean Turnell, an expert on Burmese economics at Australia’s Macquarie University, says the stalling was due to pre-election politicking and the lobbying of powerful regime cronies opposed to increased competition. This “was all made manifest by the surprising number of significant economic bills left ‘unpassed’ when the parliament was closed down at the end of August,” says Turnell, citing Burma’s “antediluvian” system of bank regulation and Company Law that dates back to a Colonial Act of 1914. Tellingly, though, while the government lacked the energy to push much-needed economic legislation, “it did find time to pass all four discriminatory and divisive religious laws,” adds Turnell.

7. A jittery military
The hope that November’s elections will be free and fair is curtailed by the constitutional stipulation that 25% of seats remain reserved for armed-forces personnel, giving the powerful military an effective veto over constitutional amendments, which require over 75% of lawmakers to pass. “They’ve already stuffed 25% of the ballots,” says Mathieson. Shwe Mann’s support for changing this clause most likely lay behind his purge, say observers, who remain divided on how much influence former junta supremo Senior General Than Shwe still wields in retirement. Certainly, the generals are not satisfied to be confined to the barracks, and should the ballot box throw up an unpalatable result, they may be spurred to intervene once again. Should the NLD perform well, another coup cannot be ruled out. 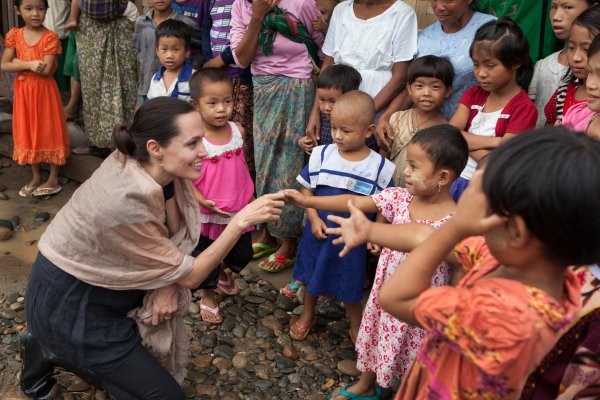