Joshua Oppenheimer’s award-winning film The Look of Silence, a companion to his Oscar-nominated documentary The Act of Killing, will be screened semiclandestinely in different cities in Indonesia Wednesday and Thursday. It is a poignant viewing for those days: Sept. 30 and Oct. 1 mark the 50th anniversary of the beginning of the anticommunist massacre in Indonesia — a bloodbath considered to be one of the worst atrocities of the 20th century.

It is a wish shared by all survivors and all the victims’ families. “The crucial step that they are hoping for is a national apology,” Oppenheimer says. “It is not the final goal, but it is the first and fundamental step.”

But a formal apology is unlikely because, despite an increasing willingness by some to confront the topic, the 1965 tragedy remains a highly controversial issue in Indonesia. Attempts to discuss and investigate the 1965 killings, from screening the two documentaries to exhuming mass graves, are often met with intimidation from authorities and militia groups.

An estimated 500,000 to 1 million people, some say even millions, perished in 1965–66 as the army, paramilitary groups and religious organizations hunted down members of the Indonesian Communist Party (which was blamed for the deaths of six army generals on Sept. 30 and Oct. 1, 1965), suspected communists and leftist sympathizers; ethnic Chinese were targeted too. Hundreds of thousands more people ended up in jails, or exiled to far-flung gulag islands or overseas.

The 1998 downfall of Suharto, the general who seized power in 1966, has ushered in democracy but failed to bring to an end the impunity enjoyed by the perpetrators of the massacre.

President Joko Widodo, the first leader of Indonesia to have no ties to the military or political elite, has repeatedly expressed his commitment to settling past human-rights violations, including the 1965–66 mass killings. In May, Attorney General M. Prasetyo announced a government-backed reconciliation committee to look into the anticommunist pogrom and several other cases of gross human-rights abuses.

But critics have slammed the committee for focusing only on reconciliation but not the truth — it would not be naming names of the perpetrators nor pursue any judicial process. “National reconciliation is only possible if there is an acknowledgment of what’s wrong,” Oppenheimer tells TIME. “Enforcing a reconciliation without acknowledging the truth is tantamount to pressurize the survivors to forgive.”

For months, rumors have been swirling that Jokowi, as the President is popularly known, would issue an apology to the survivors and the victims’ families. Conservatives, from Muslim leaders and military generals to lawmakers, remain strongly opposed to the idea. Last week, following his meeting with the President, Haedar Nashir, chairman of Muhammadiyah, a prominent Muslim organization in Indonesia, told journalists that Jokowi would not issue an apology. “He never thought about it,” Haedar said, adding that Jokowi was mindful that, should he apologize, he would have to deal with the military and the country’s largest Muslim mass organizations, Muhammadiyah and Nahdlatul Ulama, whose combined membership reaches over 60 million people.

“The 1965 human-rights crimes are always seen as an ideological issue between communism and Islam,” says Nursyahbani Katjasungkana, lawyer and rights activist, “while in fact, this is an issue of human rights and humanity.”

With no clear answer from the government, private citizens have taken their own initiative. Inspired by Oppenheimer’s documentary The Act of Killing, which, Nursyahbani says, “has opened the eyes of the world and Indonesian people,” survivors, victims’ families, human-rights activists and scholars will mark the 50th anniversary of the tragedy with a people’s tribunal. The International People’s Tribunal on the 1965 massacre (IPT 1965) will be held from Nov. 11 to 13 in the Hague; its verdict will be read in Geneva next year.

“We actually wanted to have IPT 1965 in Indonesia, but the political situation doesn’t make it possible,” says Nursyahbani, one of the tribunal’s coordinators.

In the tribunal, a team of prosecutors and a panel of judges from Indonesia and other countries, some of whom have experience in handling cases of genocide and crimes against humanity in Yugoslavia and Cambodia, will look at investigation results from the fact-finding team, determine whether these constitute crimes against humanity or a genocide and recommend steps toward reconciliation.

Although the tribunal’s verdict will not be legally binding, the organizers hope “it can push the [Indonesian] government to take up the responsibility and the international community to give attention to the third biggest holocaust in the 20th century,” Nursyahbani tells TIME. “As a people’s movement, it has a strong moral foundation.” 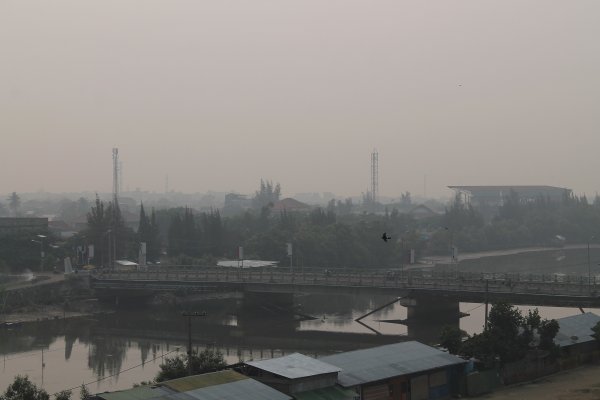 Indonesia Arrests Executives in Haze Crackdown
Next Up: Editor's Pick