Companies are stepping up to offer flexible family leave programs, but more than 90% of workers of both genders are reluctant to take advantage of them for fear of harming their careers.

That’s just one major takeaway from a new report released Wednesday by Lean In and McKinsey & Company. Although more than 80% of the 34 companies surveyed offered reduced schedules, part time schedules, telecommuting, or leaves of absence to workers who wanted to care for family members, fewer than half of 30,000 workers surveyed took advantage of these programs. While 82% of the companies offered workers the chance to work from home, only 45% of women and 38% of men did so. The other programs had even lower participation rates: only 12% of women and 11% of men took reduced schedules, 2% of both genders went part-time, and 7% of women and 8% of men took leaves of absence. That’s probably because more than 90% of workers of both genders thought taking extended family leave would hurt their careers, and more than half thought taking time off would do significant damage.

The study didn’t specify whether the leave offered was paid or not, which is of course a major part of any employee’s decision-making process. And since the Family and Medical Leave Act of 1993 guaranteed job security to employees of companies of a certain size if they had to take a leave of absence, but didn’t guarantee that it would be paid leave, the question of whether family leave is subsidized is ultimately up to the company itself. That can make a huge difference in whether employees choose to take flexibility packages.

Yet the reluctance to take advantage of company programs hits women especially hard, because the report found that women still think they are bearing the brunt of child care and chore responsibilities. 30% of senior management women said they do more chores than their partners, and 27% said they do more childcare. For middle-management and entry-level women, those rates are much higher (around 44-45% of entry level women say they’re doing more of the home and child care.) By contrast, only 3-4% of men in senior management said they did more work than their partner at home.

Taken together, this data paints a tough picture: women are still doing more of the work at home, not leaving their responsibilities at work, and apparently afraid to take advantage of the programs designed to help them balance both. Motherhood doesn’t necessarily make women less likely to want to be top executives; in fact, the report found that mothers are 15% more interested in reaching an executive role than women without kids. But of the respondents who said they didn’t want the top job at work, the reasons weren’t so clear cut. 65% of mothers said it had to do with their family commitments, but 58% said they just didn’t want the stress of the job. Since 55% of non-mothers agreed that stress would keep them from wanting to advance to the top, clearly the problem isn’t just with work-and-family: there’s a problem with work itself.

As earlier studies have shown over and over, women are still less likely to advance than men at every professional level. Yet 88% of male respondents said women had more or equivalent opportunities as men (only 55% of women said they saw equal opportunities) and 13% of men think it’s harder for men to advance because of gender diversity programs. And still, women make up only 17% of the pipeline to C-suite level jobs in 2015.

While it’s tempting to blame the difficulty of female advancement on pure sexism, the truth is likely a bit more complicated. Women are overrepresented in “staff roles” like HR and legal, and under-represented in “line roles” that are focused on core operations and have profit-and-loss responsibility. Since most CEOS come from “line roles,” that could make it hard for women to move up. Yet on the other hand, women in staff roles are slightly more likely to move from one level to the next, which makes it a difficult to tell which is the better path to take.

It may have to do with the diversity of networks. Almost two thirds of men say that the people who helped them advance in their careers were men, compared to just over a third of women. Men are more likely to have predominately male networks, while women are more likely to have mostly female or mixed networks. And since there are more men in top roles, that network bias just reinforces itself over and over.

The report offers several solutions to these problems, including the establishment of formal mentorship programs and prioritizing support of senior-level women. The researchers emphasize that more companies need to invest time and money in gender diversity, and hold CEOs accountable for the makeup of their staff. 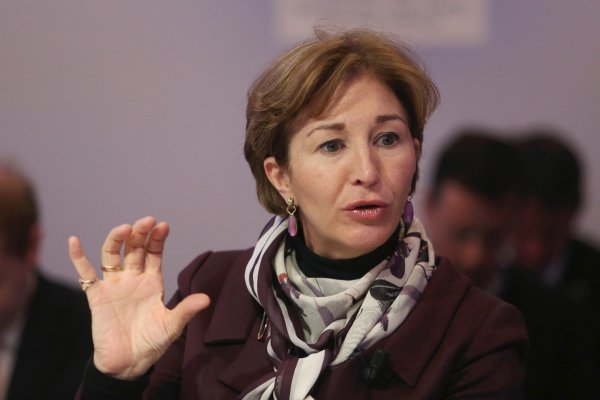 Here's What Anne-Marie Slaughter Has to Say About Sheryl Sandberg
Next Up: Editor's Pick