Jessica Chastain arrives for the UK premiere of "The Martian" at Leicester Square in London on Sept. 24, 2015.
Stefan Wermuth—Reuters
By Megan McCluskey

Jessica Chastain spoke out about the film industry creating oversexualized female characters in order to draw audiences to theaters. During an interview with Radio Times to promote her upcoming role in Ridley Scott’s The Martian, the actress explained that Hollywood has a penchant for poorly portraying its leading lady action stars.

“If you look at films like Elektra and Aeon Flux, the problem that studios have is they try to make kick-ass women very sexualized,” Chastain said. “They have to be in some catsuit.”

She also commented on the characteristics that her ideal female action hero embodies.

“But if you look at the most incredible female roles, like Ripley in Alien, she is a very sexy woman but she’s not wearing a lot of makeup,” the actress remarked. “She’s in a T-shirt and jeans. What’s sexy about her is how capable she is. Same with Jennifer Lawrence in Hunger Games – she’s not wearing a catsuit, either. Studios have misjudged it in the past and thought audiences weren’t interested in seeing a woman in an action role who’s a capable, intelligent woman and isn’t only leaning on her sex.”

In The Martian, Chastain plays Commander Lewis, the astronaut captain of a crew on Mars. She stressed that she only cares about movies in which actresses portray roles that are as intriguing as their male counterparts’. 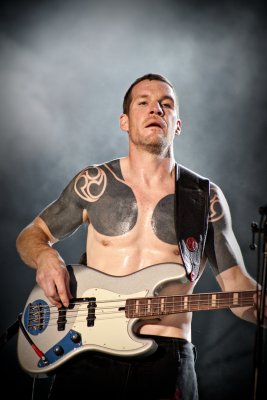 Rage Against the Machine's Bassist Is Very Sorry About Limp Bizkit's Existence
Next Up: Editor's Pick