Google had a busy Tuesday, dropping two new phones, a pair of Chromecasts, a new tablet and a release date for the new Android software. Here’s what you missed.

First, there’s the higher-end Nexus 6P. It’s a 5.7-inch device running Android 6.0 Marshmallow and made by China’s Huawei. The 6P has an all-metal body, a 12.3 megapixel rear camera that shoots 4K video, and fast-charging technology using the new USB-C. There’s also a fingerprint sensor on the back (unlike many other smartphones, where it’s on the front) for security features. The 6P starts at $499 for a 32GB unlocked unit which can run on any major carrier or Google’s own Project Fi. Pre-orders start today, expect the first shipments in October.

Then there’s the more affordable Nexus 5X, which starts at $379 for the 16GB version and is a generally less powerful phone than the 6P. Made by LG, the Nexus 5X is a 5.2-inch smartphone also running Marshmallow. It has a 12-megapixel camera, also charges with USB-C and also has a rear fingerprint sensor. Pre-orders also start today.

Buyers of either phone can also choose to purchase Nexus Protect for their devices, which is Google’s answer to AppleCare. The replacement and repair program starts at $69 for the Nexus 5X and costs $89 for the Nexus 6P.

Chromecast fans, rejoice: You get not one but two new models of Google’s popular streaming stick.

The first is an upgrade to the existing video-focused Chromecast, which now looks less like a stick and more like a puck (there must be hockey fans at Google). The design is meant to make it easier to fit behind a television. Google also says the Chromecast itself as well as the Chromecast app have gotten upgrades meant to make streaming faster and a better overall experience.

The brand new Chromecast, meanwhile, is called Chromecast Audio. It’s designed to turn dumb speakers smart: Plug it into an analog audio system, and suddenly it’ll be able to play music from the cloud.

Both Chromecasts are on sale immediately for $35.

Is it a laptop? Is it a tablet? Is it a laptablet? Who knows. But the Pixel C is Google’s tablet-laptop hybrid answer to Microsoft’s Surface and Apple’s new iPad Pro. It starts as a $499 tablet running Android 6.0 Marshmallow, while an optional $149 Bluetooth keyboard opens up a new laptop mode. Google says the Pixel C will be on sale before the holiday season. 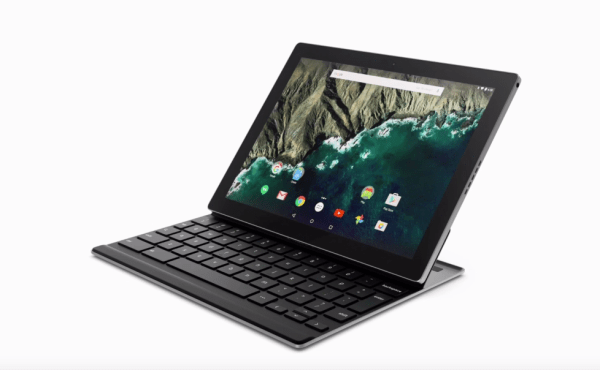 Google's New Tablet Can Hide a Surprise Keyboard
Next Up: Editor's Pick