You know what First Lady Michelle Obama is most looking forward to when she leaves the White House? Opening a window.

They say it’s the little things that matter most in life. In this case, that seems like it’s true.

During an appearance on the Late Show with Stephen Colbert, Mrs. Obama told the comedian that she’s most looking forward to being able to open a window, or simply drive herself to Target, when the first family moves out of 1600 Pennsylvania Ave.

“One day as a treat, my lead agent let us have the windows open,” Mrs. Obama recalled. “It was five minutes out” from Camp David.

First Lady Michelle Obama stopped by the show on Monday to promote her latest campaign to encourage educational opportunities for girls across the world.

Over the weekend, the First Lady announced #62MillionGirls, part of her Let Girls Learn initiative, at the Global Citizen Festival in New York. The goal is to bring attention to the fact that 62 million girls around the world are not in school, in order to spark conversation and change. Mrs. Obama is calling on the social media savvy to share a selfie using the hashtag along with a quip about what they learned in school.

“Our goal is to make sure every girl on the planet gets the opportunity that our girls get,” Mrs. Obama said, speaking about her and the President’s two teenage daughters.

Colbert and the First Lady praised the work of Malala Yousafzai, who was a recent guest of the late night host, before sharing his and the First Lady’s selfies for education. In a weekend Instagram post, Mrs. Obama said she learned how to speak her mind in school. Colbert, on the other hand, tweeted something more wry.

The conversation turned cute when Colbert shared a school photo of the First Lady when she was in kindergarten. The image of the gap-toothed, pig-tailed version of Mrs. Obama elicited a delighted “aw” from the audience.

Colbert also asked Mrs. Obama if she would be leaving a letter for her successor—who could end up being a man, given that there are two women running for president. Her words for the potential First Gentleman? ”Follow your passion. Just be you” 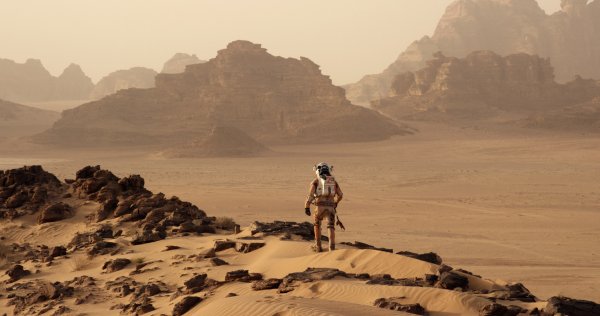 'The Martian' Director Says He Knew About Mars Water
Next Up: Editor's Pick