NASA’s big announcement that liquid water exists on the surface of Mars — raising hopes of past or present life on the red planet — came at a perfect time for Fox’s sci-fi film The Martian. Too perfect, some might say.

Within moments of the announcement, Twitter began lighting up with cynicism and sarcasm suggesting that the news was timed to generate more attention for both the film, which opens Friday, and NASA’s own explorations. On Monday, The Martian director Ridley Scott did nothing to dispel the notion that the space agency was waiting for the most opportune time to present its findings about water on Mars.

“I knew that months ago,” Scott told Yahoo Movies.

Scott worked closely with NASA on the making of The Martian, which is based on Andy Weir’s hard-sci-fi novel about an American astronaut (Matt Damon) who is stranded on Mars and uses his scientific know-how to survive.

According to Scott, the topic of H2O on Mars came up during his discussions with the agency. “When I first talked to NASA, we got into all kinds of stuff and I said, ‘So I know you’ve got down there [these] massive glaciers,’” Scott said. “And he said, ‘Yeah, that the massive white thing [on the surface of Mars] that gets covered with dust, we think that’s ice.’ And I said, ‘Wow! Does that mean there was an ocean?’ Are we right now what Mars was 750 million years ago?’ And they went, ‘Uh, good question.’ So they want to go up there and find out.”

But Scott specified to the New York Times that he only learned about Martian water after the film went into production — sparing him from having to adjust the plot. “[Damon’s astronaut] would’ve found the edge of a glacier, definitely. It would be fascinating,” said Scott. “But then I would’ve lost a great sequence. He has to make water, and the steaming device, and put up the plastic tents, which creates the humidity, which grows the plants, which is the most basic form of irrigation.” 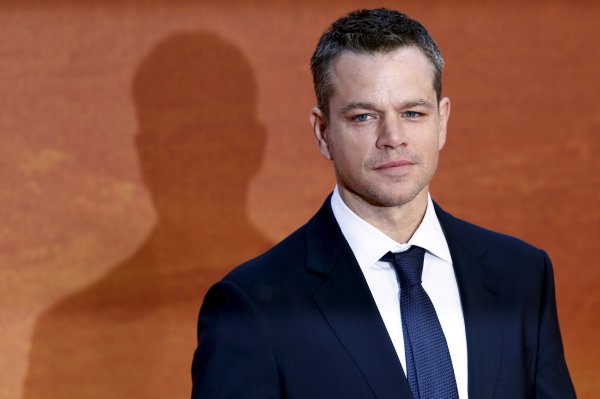 Matt Damon Suggests Being Out Hurts Gay Actors' Careers
Next Up: Editor's Pick