Banksy’s ‘Dismaland’ Will Be Used to Shelter Refugees in France

The disassembling of Banksy’s “Dismaland” will begin Monday, and the fragments will be used to help shelter refugees in Calais, a port city in northern France, the Guardian reports.

The street artist’s “bemusement park”—a dystopian pop-up exhibition described as a “family theme park unsuitable for children”—first opened in Somerset, England, on Aug. 22. It sold out every single day of its five-week long run, attracting about 4,000 visitors a day and reaching a total of 150,000 people by the time it closed despite Banksy calling it “crap.”

Although the number of migrants in Calais is currently at a high due to the refugee crisis, it has been a destination for refugees for over 15 years. The controversial Sangatte refugee camp was opened there in 1999, according to BBC. Despite the camp being closed down in 2002, refugees continued to camp there on the grounds known as “the Jungle.” The BBC writes that the refugees are camping there in an attempt to get to the UK via the English Channel.

The deconstruction of “Dismaland” is expected to take about three weeks and all the timber and fixtures will be shipped to Calais. 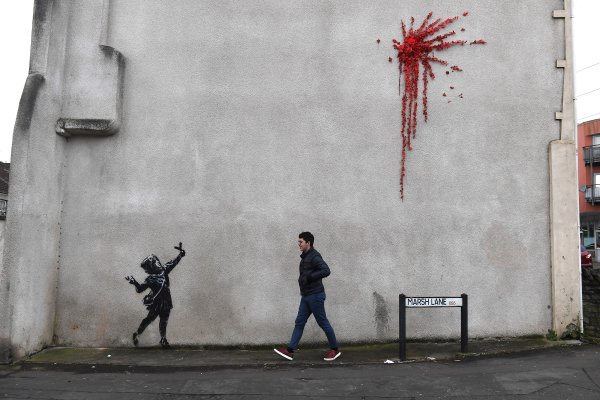 There's a Lot to Love About the Banksy Art That Popped Up for Valentine's Day
Next Up: Editor's Pick