Over the weekend, BlackBerry unveiled its so-called Priv phone in its first official demo. Verdict: It’s uncomfortable to sit through.

You can watch BlackBerry CEO John S. Chen fumbling with the phone, hands hovering maladroitly above its screen and signature retractable keyboard, in an exclusive on-camera interview with Business News Network.

“And the claim to fame, obviously,” he said, presenting the phone’s key feature, “the slider.”

“Your finger will be like a mouse,” he added, waving a semi-clenched hand up and down as though actually manipulating a computer mouse.

The presentation, let’s just say, fails to achieve the level of ex-Apple CEO Steve Jobs’ panache. Indeed, it’s is a far cry from what consumers have come to expect from rival companies such as Apple, which engineer all aspects of their product demos.

In the video, Chen struggles to open a Google Chrome search engine app on the phone’s home screen. He awkwardly taps the glass six times, finds that the app is not yet set up, and proceeds to exit it.

“Obviously, it runs Google,” he said, before hitting the roadblock. “Then I have to set it up,” he added. “This is a demo unit.”

Chen’s hand wavers above other app icons as he mumbles and apparently decides to change tack. He talks about the phone’s specs instead.

“So is this going to be the phone that brings back the BlackBerry user that abandoned because they needed a different operating system?” the reporter asked him.

“I think everyone loved the BlackBerry 10. They really do,” he said of the company’s proprietary operating system, which claims a paltry 0.3% market share, according to research firm IDC. “But there’s not enough apps. So if I could provide all of the apps of BlackBerry 10 that would be a smashing success.”

“Unfortunately, I can’t put the two together for all the practical reasons and logistic and financial reasons,” he said, referring to the company’s decision to debut a phone powered by Google’s (GOOG) mobile operating system Android. “But this is really the best thing we could do.”

You’ve got to feel for the guy.

For more on BlackBerry, watch the demo here. 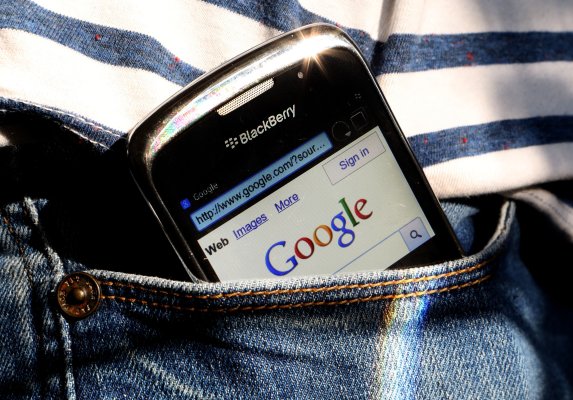 Why BlackBerry's CEO Says He's Making an Android Phone
Next Up: Editor's Pick