The U.N. Chose Way Too Many New Development Goals

President Barack Obama attends the General Assembly at the United Nations in New York City on Sept. 27, 2015.
Steve Sands—WireImage
Ideas
By Bjørn Lomborg
Bjorn Lomborg is president of the Copenhagen Consensus Center, a think tank ranking the smartest solutions to the world's biggest problems by cost-benefit.

After years of build-up, world leaders at the U.N. Friday set some of the most important priorities for the next 15 years, the sustainable development goals. At stake is about $2.5 trillion in development aid. Unfortunately, because of politicking and a desire to please everyone, this massive budget will likely achieve less good than it could.

The presidents and prime ministers agreed to replace the eight goals and 18 targets of the Millennium Development Goals with an impossibly long list of 17 goals and 169 targets. The chief problem with this new laundry list of targets is that trying to prioritize 169 things looks very similar to prioritizing nothing.

Researchers for Copenhagen Consensus—the think tank that I am president of—explored how much social benefit the targets would achieve, and found that some targets could achieve a huge deal, others very little. Spreading money and energy thinly among them reduces the overall good that we do.

The target to achieve “full and productive employment and decent work for all women and men” appears admirable—but making zero unemployment a global policy is foolish. Every economy needs some unemployment to allow workers to change jobs. Governments are already focused on getting more people into work. Moreover, studies show such language is used by interest groups to create jobs for a minority, while leaving others out in the cold, often pushing vulnerable workers back into the informal economy and increasing poverty. The costs of this target will likely outweigh the benefits.

Yet some targets are worth pursuing. Copenhagen Consensus analysis by a panel including several Nobel laureate economists found that there are 19 specific targets within the 169 that would do more than $15 of good for every dollar spent.

Achieving universal access to contraception and family planning would mean fewer orphans and mothers dying in childbirth. It would also generate a demographic dividend—more people of productive age. In total, every dollar spent would mean about $120 of benefits to society. Ending tuberculosis by 2030 would save nearly 1.5 million lives a year, with each dollar leading to $43 worth of benefits, and completing the Doha free trade deal would lift incomes and cut poverty especially in developing countries, with benefits worth $2,000 more than the costs.

Analysis of all the benefits and costs shows that focusing development spending on the top 19 targets identified by the Copenhagen Consensus Center would achieve about four times more than if we distributed it among all 169 targets.

What happens next? Every leader—from both donor and developing countries—knows that when they return home, their countries will not be able to work on, monitor or evaluate 169 different targets, so they will inevitably have to choose a smaller number to focus on.

We should start by focusing on the 19 targets that are the most effective. It would see every dollar go about four times farther. And it would mean that in 15 years, global leaders will have done about four times more good. That is a worthwhile legacy.

Dr. Bjorn Lomborg directs the Copenhagen Consensus Center, which ranks the smartest solutions to the world’s biggest problems by cost-benefit. His new book is “The Nobel Laureates’ Guide to the Smartest Targets for the World.”

Write to Bjørn Lomborg at david@copenhagenconsensus.com. 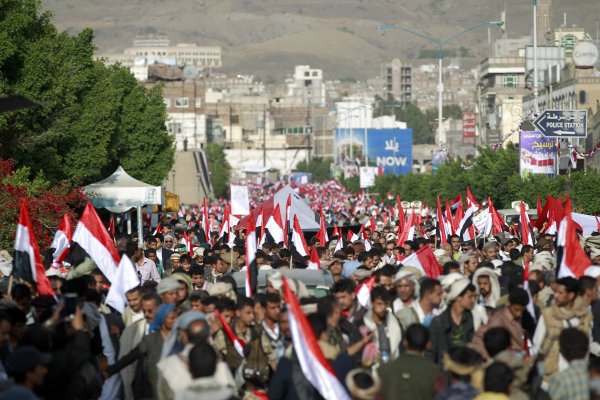 What Intervention in Yemen Means for UAE's National Identity
Next Up: Editor's Pick