Royal Dutch Shell Plc is to stop drilling for oil off the Alaskan coast “for the foreseeable future” and take a financial hit, after initial exploration results failed to live up to expectations.

The news will dismay shareholders, who have seen the company plow $7 billion into a high-risk, high-return bet that has failed to pay off. It illustrates the souring climate for high-cost oil production against a backdrop of low prices around the world. Over $200 billion of exploration and production projects has been scrapped since Saudi Arabia decided it would no longer restrain output to keep prices high, according to some estimates.

At the same time, it will delight environmentalists who have been campaigning to stop the project. A spokesman for the environmentalist NGO Greenpeace, which has waged a high-profile campaign against drilling in the Arctic, said there were “hugs and high fives in the office” at what could prove to be a watershed moment for the future of the offshore industry in Alaska.

Shell said in a statement it had found indications of oil and gas in the Burger J well, some 150 miles from Barrow, Alaska, but said it wasn’t enough to justify further exploration.

The company valued its Alaskan operations at $3 billion but now said it “expects to take financial charges as a result of this announcement.” It’s also locked into another $1.1 billion of contractual commitments. However, it didn’t say how much it expected to have to write off against the project.

Shell had paid $2.1 billion for drilling rights in a block of the Chukchi Sea–an area half the size of the Gulf of Mexico–in 2008, when global oil prices were close to their all-time highs. At the time, the hope was that the block would yield the biggest offshore oil discovery in a generation. (Click here for FORTUNE’s in-depth account of the project in 2012.) The project has been plagued by problems for years, notably when its drilling rig ran aground in some of the world’s most hostile waters in 2012.

The company’s commitment to the Arctic project had seemed increasingly out of sync in a world where oil companies large and small are having to make savage cuts to stay profitable. Crude oil futures, which were over $100 a barrel less than a year ago, haven’t traded above $50/bbl in over two months, wrecking the arithmetic of many new projects. Shell had previously estimated that the economics of the project were roughly similar to those of a deepwater Gulf of Mexico play, suggesting it would make an acceptable return with oil prices above $55/bbl.

“Big oil has sustained an unmitigated defeat,” said Greenpeace. “President Obama should use his remaining months in office to say that no other oil company will be licenced to drill in the American Arctic.”

Companies including ConocoPhillips also have drilling rights off the Alaskan coast, but have put their plans on ice due as the collapse in prices has altered the risk-reward calculation.

Shell said it will provide a more detailed update about possible write-downs in its third-quarter earnings on Oct. 29 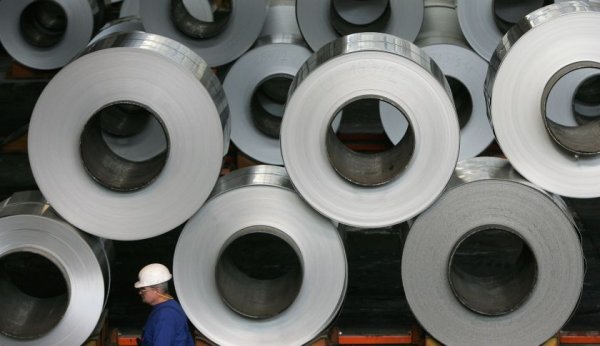 Aluminum Giant Alcoa Is Splitting Into Two Companies
Next Up: Editor's Pick