All Your Supermoon Eclipse Questions Answered

Stargazers were treated to a rare sight on Sunday night: a supermoon eclipse. The phenomenon only happens when a full lunar eclipse coincides with the moon’s closest approach to the Earth. Until Sunday night, these events had not occurred in unison for 33 years, and another 18 years will pass before we get to experience a supermoon eclipse again.

Here’s what you need to know about the celestial event.

What is a supermoon eclipse?

A supermoon happens when a full moon reaches the closest point to Earth in its orbit (the orbit is not a perfect circle, so one point, called the perigee, is closest). At this point, the moon is only 225,000 miles from the Earth. That’s what makes the moon look about 14% larger and 30% brighter in the sky. A full lunar eclipse occurs when the sun, Earth and moon line up, with the Earth directly between the moon and the sun, and the moon completely in the Earth’s shadow, which gives the moon a reddish tint.

A supermoon eclipse is the simultaneous combination of these two events.

How frequently does a supermoon eclipse occur?

Why did the moon look reddish?

The moon’s reddish tint was a result of light being scattered through the Earth’s atmosphere and cast back toward the surface of the moon. Only light that passed through our atmosphere reached the moon, and since the planet’s gaseous envelope traps blue light, it acted like something of a filter, only reflecting the more reddish light onto the moon. That color can vary based on how much dust is in the Earth’s atmosphere during the eclipse.

“You’re basically seeing all of the sunrises and sunsets across the world, all at once, being reflected off the surface of the moon,” NASA scientists Dr. Sarah Noble told the New York Times.

How did it look in different parts of the world?

The full supermoon eclipse was visible from the eastern half of North America, South America and the western half of Africa and Europe. Stargazers on the East Coast of the United States were particularly well positioned to see it based on weather conditions and the convenient time of night it occurred.

Stargazers in the western half of North America, the rest of Europe and Africa, the Middle East and South Asia did not miss out entirely. But they were treated to just a partial eclipse, and so the missed out on the full crimson hue.

How long did the supermoon eclipse last for?

The full eclipse started about 10:11 p.m. E.T. and lasted a little over an hour. 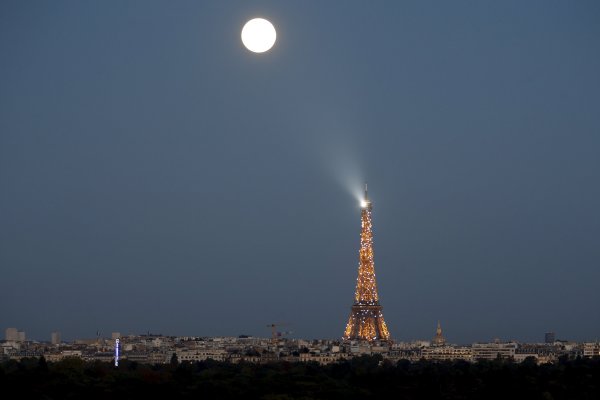 See the Best Photos of the Once in a Generation Supermoon Eclipse
Next Up: Editor's Pick