Watch This Man Propose to His Girlfriend on a Roller Coaster

The Internet has seen some creative wedding proposals over the years, but this one might take the award for most adorable non sequitur.

Austin Crecelius decided to pop the question to girlfriend Allison Boyle while riding on the Voyage, a wooden roller coaster, at Holiday World in Santa Claus, Indiana.

“At one point in time you had mentioned to me that life is like a roller coaster,” Crecelius starts off his speech as the coaster mounts a steep hill. “And it’s got its up and downs, it’s got twists and turns, and it even throws you for a loop sometimes. And though you can go by yourself, it’s a lot more fun to go with another person.

“So I wanted to ask you if you wanted to be my roller coaster buddy,” he continued. “Allie will you marry me?”

Boyle responded by tearing up as the couple’s friends videotaped the entire moment in front of their coaster seat.

“I waited in line for 15 excruciating minutes nervously waiting to pop the question,” Crecelius told NBC News. “There was even one point in time where she asked me if I felt really hot because my face was red and I was sweating.”

In case you’re wondering, yes, Crecelius did bring the ring onto the coaster, but he luckily did not drop it! 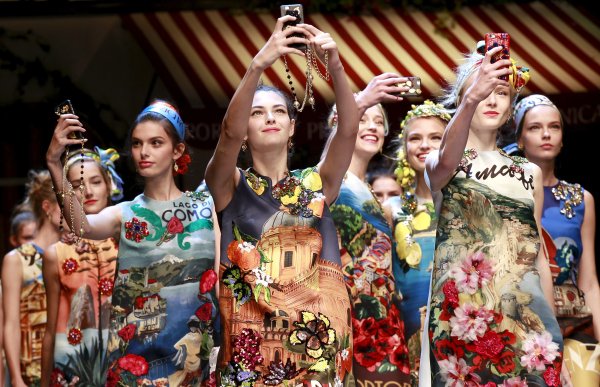 Models Are Now Taking Runway Selfies
Next Up: Editor's Pick