For 79 days last year, the world was watching Hong Kong as this towering metropolis, carved into verdant hilltops and following the sweep of cerulean bays, came to a standstill. Beginning on Sept. 28, 2014, as many as 200,000 defiant Hong Kongers took to the streets to demand the democracy they had been promised when the U.K. returned its last colony of note to Beijing in the summer of 1997.

The movement was known interchangeably as Occupy Central, the Umbrella Revolution, and the Umbrella Movement, the latter two monikers referring to the umbrellas brandished as a totem of protest by those who flooded the streets of Admiralty and Central — respectively Hong Kong’s primary political and financial wards — and also Causeway Bay, a neon bastion of high-end retail, and Mong Kok, a blue-collar district across the harbor in Kowloon.

Exactly a year has passed since the beginning of the protests, and on Monday throngs of activists returned to their old stomping grounds to commemorate the anniversary of the largest demonstration for political freedom on Chinese soil since the Tiananmen Square massacre of 1989.

Monday’s gathering came under cheerfully blue skies — an increasingly rare exception to Hong Kong’s usual smog — yet the ethos of the day was mostly pensive, in remembrance of things lost, rather than an eye to the future. One volunteer, Ivy Chen, assembled on a blanket a miscellany of things she’d recovered from the streets a year ago: eyeglasses, notebooks, a denim jacket, a handful of Octopus cards (Hong Kong’s transit payment card).

“I figured I’d set up a lost and found,” she said.

Local media reported that anywhere from 1,800 to 4,000 police officers would be on the ground to maintain order. By 3 p.m. local time, blue-shirted policemen were ubiquitous but resigned along the barricades on Harcourt Road, waiting for the violence darkly threatened on local web forums.

Reality underwhelmed. What some anticipated to be a repeat of last year’s spectacle — furious, passionate students scaling barricades, sputtering in clouds of tear gas — was instead a devotional of reflection, with moments of opportunity to speculate in broad terms about what may come next. A chain of yellow umbrellas lined the walls of the Legislative Council headquarters. Tense standoffs between a breakaway crowd of radical demonstrators and the police were short-lived and inconsequential.

Some found themselves there in the interest of nostalgia. University student Elizabeth Wong, 23, came with her father Alex, who, in his words, has “fought for democracy in Hong Kong for 30 years.”

“This gathering is sad, in a way,” said Elizabeth Wong. “We’re here for the memory of last year — but to remind ourselves that there’s something we haven’t finished.”

“We haven’t achieved any political reform. But I want the world to know that the Umbrella Revolution isn’t over — we want to fight for democracy,” Joshua Wong, the bony 18-year-old student whose leadership made him a political celebrity, told TIME over the phone on Monday morning. (He currently faces charges related to his storming of a public square a year ago, an act which catalyzed the revolution, and which he recently described to TIME as “the best decision I made in the past few years.”)

But even those who stand by the cause were subdued. The prevailing sentiment is that the future not be neglected — Alex Chow, a prominent student leader, told TIME on Monday that the new focus is crafting a coherent political syllabus to re-engage the people — but the chutzpah of revolution is muted.

“It is quite meaningless [to have a] ‘memorial’ of the movement,” says Agnes Chow, a placid teen who a year ago stood alongside Wong at the forefront of the movement. She seems vaguely cynical now, busy with her studies. “It is more important to think of the direction of the future movement — but not the memorial,” she concludes.

Some are pushing ahead in radical new directions, calling for self-determination for Hong Kong, and even independence. But the issue, many say, is that the direction is directionless. The cry of Occupy Central was the demand for what Hong Kongers call universal suffrage: the right to directly nominate candidates for, and to elect, their all-powerful mayor, or chief executive as he — it has always been a he — is called here, rather than live under the rule of a leader selected by an electoral college largely comprising supporters of the central government. They may never get their wish.

“One country, two systems?” a Hong Kong taxi driver laughed derisively on Monday morning. He was referring to the operative principle outlined in the Basic Law, Hong Kong’s de facto constitution, which stipulates that Hong Kong under Chinese sovereignty would enjoy a high degree of autonomy. “No. One country, one system.”

In mid-June, Hong Kong’s Legislative Council came to vote on a policy proposal that would permit Hong Kongers to directly elect their chief executive — albeit one from a shortlist of candidates screened and hand-picked by Beijing. Pro-establishment politicians celebrated it as a noble compromise (“I think having your chance for 5 million people to elect the chief executive, even with … candidates screened by Beijing, is better than the current situation,” James Tien, honorary chairman of the pro-establishment Liberal Party, told TIME). The pro-democracy camp scoffed.

The bill didn’t pass. And so the old system — the unrepresentative electoral college that furiously galvanized this city for months last autumn — is here to stay. As if to underscore that, on Sept. 12, Zhang Xiaoming, the Chinese Communist Party’s top representative in Hong Kong, said that in spite of the territory’s constitutional right to autonomy, the chief executive will always be answerable to Beijing.

It seems the revolution is over for now. The trams and red taxi cabs flow through Central Hong Kong every morning, no longer obstructed by camping tents and barricades that filled the streets a year ago. Beijing seems smugly confident in its hegemony over its maritime metropolis. Some speculate that concrete political change — in other words, the establishment of sincere democracy in Hong Kong — is a pipe dream. But it is a dream, Hong Kongers have learned, that is worth studying.

And so Harcourt Road was filled once again on Monday with the bloom of yellow umbrellas, and with the triumphant calls of a future that seems close enough to grasp. In a recent essay for this magazine, Joshua Wong called for self-determination for Hong Kong — making him the most prominent figure to do so. September 2015 may seem quieter, but look closer, and it calls to mind “Easter 1916.” Irish poet William Butler Yeats could have almost been talking about ordinary Hong Kongers when he wrote in his famous poem: I have met them at close of day/ Coming with vivid faces/ From counter or desk. One year later, all are only too aware that all is changed utterly: A terrible beauty is born. 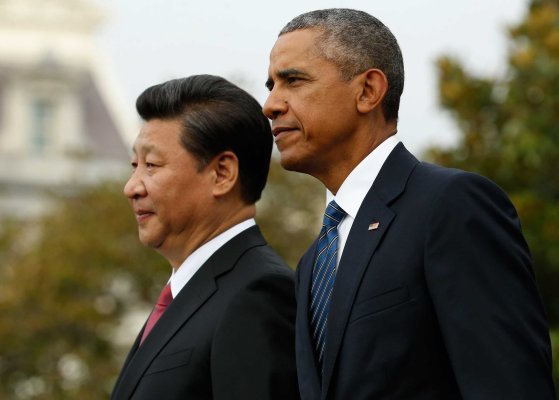 See Where China Is Spending Billions on American Businesses
Next Up: Editor's Pick