An enormous sinkhole opened up on a prime tourist beach in Australia over the weekend, swallowing an RV, a car, a trailer and some tents as vacationers fled in terror.

The 200 m by 50 m chasm suddenly appeared at Inskip Point on Queensland’s famed Fraser Island on Saturday evening, local media reports. Around 300 campers had to be evacuated from the area though no one was hurt.

“People were basically on the edge of it with their van, trying to madly get their vans out,” camper Sylvia Murray told ABC news.

“I thought we were goners for sure, was truly scary how fast it came into our camp site and swallowed it up,” Melanie Wotherspoon, another camper, wrote in a Facebook post, according to Brisbane tabloid newspaper, the Courier-Mail.

Sinkholes form when rocks are dissolved by water with acidic properties and can also be caused by earthquakes. Scientists are now using ground-penetrating radar technology to determine the exact cause of this particular phenomenon, ABC reports.

However, the Department of National Parks said in a statement Monday that the event may have been “a ‘near shore landslide’ rather than a true sinkhole.” The hole is now up to 9 m deep, the Courier-Mail reports.

According to geotechnical engineer Alison Golby, “There appears to be elements of a slip or slump failure here, rather than just a sinkhole-type behavior.”

“They [need to] do some analysis — use some geoscientific tools to test and see if there is a larger instability or a larger cavity underneath that area to know if it is going to get any bigger or not,” she told ABC. 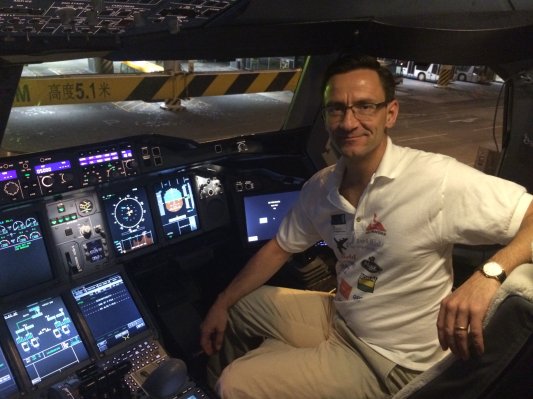 Man Flies For 12 Days to Raise Money For Cystic Fibrosis
Next Up: Editor's Pick