Over his whirlwind tour of the U.S., Pope Francis returned again and again to a single word: dream.

At the White House, he said that he looked forward to hearing the dreams of the American people, while before Congress he praised the dreamers of the American civil rights movement. He even urged third-graders at a parish school in Harlem, many of whom were immigrants, to pursue their dreams.

It was no accident. Pope Francis is both a student of the Bible and an astute observer of American politics, and dreams play a central role in both, from Martin Luther King Jr.’s “I Have a Dream” speech, which Francis referenced multiple times, to the so-called Dreamers, young undocumented immigrants who want to become U.S. citizens.

In talking with immigrants, Francis often referred to the American dream, the age-old idea that individuals can improve their lives through hard work and opportunity, but he often recast it as more of a spiritual quest. It was an idea that he first began to develop on the first leg of his tour, in Cuba.

At an event with young Cubans in Havana, one man told Francis of his dream for a new future in the socialist nation. Francis scratched his prepared remarks to respond. At a moment when the island is transitioning toward increased openness with the West, his words were poignant.

“The word that hit me hard: dream,” Pope Francis said, responding to the young man. “We have to allow for the ability to dream. The young person who is not capable of dreaming is closed in on himself … Cuban youth, even though you may think differently, have different points of view, I wish that you go together, seeking hope, seeking the future.”

He pursued the same idea when speaking to the U.S. Congress, the opposite end of the power spectrum from the young man in Havana. He referenced the inspiration of King’s march from Selma to Montgomery and argued before the country’s leaders that today’s immigrants only strengthen the American dream.

“I am happy that America continues to be, for many, a land of ‘dreams,’” he said. “Dreams which lead to action, to participation, to commitment. Dreams which awaken what is deepest and truest in the life of a people … We, the people of this continent, are not fearful of foreigners, because most of us were once foreigners.”

For Francis, who can be critical of materialist excess, the point of the American dream, then, is not success, but fulfillment. The young person who dreams of the future, the immigrant who dreams of a better life, and the activist who dreams of improving society — all are engaged in the pursuit of happiness of some sort, and seeking joy is a pathway to the divine.

The message was most explicit when Francis visited with children — many of whom are immigrants and refugees — at Harlem’s Our Lady Queen of Angels School. In plainspoken Spanish, he told the children that he knew how hard it can be to move to a new country, with a new culture and a new dominant language and without the friends they left behind.

Read More: Pope Francis, At Home Among the Schoolchildren

“It is beautiful to have dreams and to be able to fight for them,” Francis said. “Dear children, you have a right to dream and I am very happy that here in this school, in your friends and your teachers, you can find the support you need … Wherever there are dreams, there is joy, Jesus is always present.”

Francis also spoke of dreams as a form of hope. Speaking to imprisoned men and women in Philadelphia’s largest jail, he told them why Jesus’ act of humility in washing the feet of his disciples was so important.

“Unless I wash your feet, I will not be able to give you the life which the Father always dreamed of, the life for which he created you,” Francis said, paraphrasing Jesus’ remarks at the Last Supper. “Jesus comes to meet us, so that he can restore our dignity as children of God. He wants to help us to set out again, to resume our journey, to recover our hope, to restore our faith and trust. He wants us to keep walking along the paths of life, to realize that we have a mission, and that confinement is not the same thing as exclusion.”

In the end, Pope Francis’ message for Americans, whether they were Presidents or prisoners, schoolchildren or Senators, was to keep dreaming. He spoke rarely, if at all, of achieving those dreams. For Francis, the act of dreaming is more important than any individual dream. 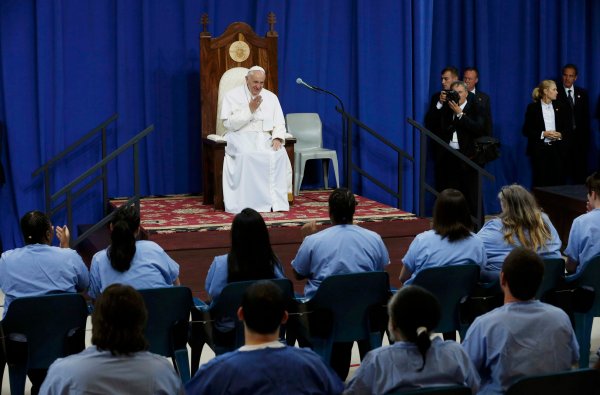 Read the Speech Pope Francis Made at a Philadelphia Prison
Next Up: Editor's Pick