New paparazzi pictures appear to show actor Kit Harington on the set of Game of Thrones in Belfast, Ireland, raising questions about the characters true fate.

The internet is in a tizzy over the new shots, considering his character, Jon Snow, died in the show’s Season 5 finale. The Daily Mail published grainy photos of the star, which show him on set in full costume with sword in hand.

The shots are particularly provocative considering Harington’s recent statements on his future with the show. A September interview with Belgian news outlet Humo, as translated by a user on Reddit, has been interpreted by some as an admission by the actor that Jon Snow is indeed alive.

“The important thing is that I now know exactly how long I am still under contract … Let’s just say that Game of Thrones will remain a part of my life for a while, I’ll probably be in my thirties when it’s over,” said Harington, according to the translation, which was confirmed by the Huffington Post.

HBO president Michael Lombardo, meanwhile, has worked to squash rumors of a Snow resurrection. “Dead is dead is dead. He be dead … Everything I’ve seen, heard and read, Jon Snow is, indeed dead,” Lombardo told reporters in July

The star himself has also thrown a wet blanket on resurrection theories, telling Entertainment Weekly, “I’m dead. I’m not coming back next season.” Well, then.

But the new images have still stoked hopes among Game of Thrones fans that the beloved character might one day return. After all: What is Kit doing on set if he’s actually gone?

For GoT watchers who want to dive deeper into the mystery,Vanity Fair has some insight on Harington’s attire and the possible characters he’s with on set. Only time will tell whether Snow has actually survived, but that hasn’t stopped many on Twitter from celebrating his purported recovery. 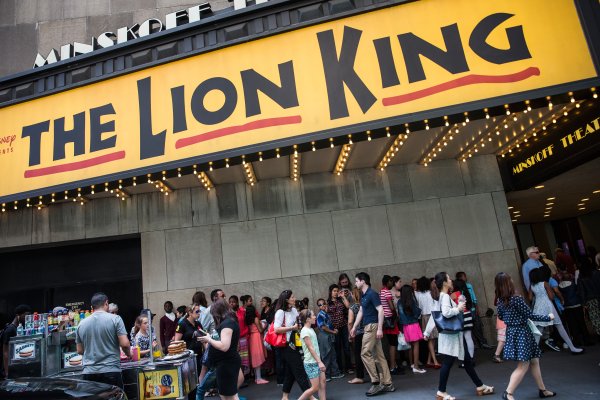 The Lion King Musical Almost Had a Crazy Alternate Ending, Says Director
Next Up: Editor's Pick