You may have followed the unfortunate social media saga of hedge fund manager Martin Shkreli, who was the subject of a New York Times story last Sunday that, in less than a week, caused such a backlash he had to reverse a major business decision and lock down his Twitter account.

Shkreli, 32, started a hedge fund, MSMB Capital, in his 20s and attempted to influence the FDA “not to approve certain drugs made by companies whose stock he was shorting,” according to the original Times story. He has a history with pharmaceutical maneuvering: in 2011 he started a company called Retrophin, which raised the prices of old drugs, but the company fired him last year and has accused him, in federal court in Manhattan, of taking money from Retrophin’s coffers to pay back investors in MSMB Capital.

Now the CEO of a company called Turing Pharmaceuticals, Shkreli’s latest move, and the subject of the Times story, was to raise the price of the drug Daraprim from $13.50 to $750 per pill. That resulted in a wave of negative attention. Twitter users reached out to the young Wall Streeter, and for a while, he responded to many. One asked Shkreli, “How do you manage to sleep at night?” He responded: “You know, ambien.” He also tweeted complaints about the New York Times and, as a message to the haters, tweeted Eminem lyrics about giving people the middle finger.

Now another domino has fallen for Shkreli. Collect Records, an indie music label based in Brooklyn, has cut ties with him, The Guardian reports. Shkreli was an investor and supporter of Collect Records. Geoff Rickly, the label’s owner and the former lead singer of the band Thursday, released a statement about his choice to “fully sever” the relationship.

“When I decided to get into business with Martin, we took him on as a patron,” said Rickly. “He was completely silent and allowed us to do business as we pleased… Never in a million years did any of us expect to wake up to the news of the scandal that he is now involved in. It blindsided and upset us on every level. As such, we know it is impossible for us to continue having any ties with him.”

Shkreli hasn’t commented or responded to the news. It’s unclear if he has tweeted about it, since his tweets are now private. 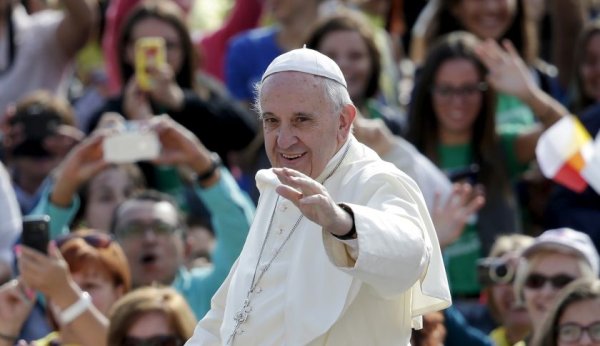 The Pope Is Releasing a Rock Album that Will Be On iTunes
Next Up: Editor's Pick