Woodstock Poland is a free three day music festival run by the Great Orchestra of Christmas charity. With over 750,000 attendees, it is one of the largest music festivals in the world.
Peter Bohler
By Rachel Lowry

They are formally trained. They are digitally savvy. They are flying solo and they want to define their own rules.

A new State of News Photography study published last week examines a growing demographic of young photographers in today’s photojournalism industry whose attitude toward things like social media use, ethics and the level of risk to which they are exposed strongly differs from the analogue generation before them.

The study is based on a survey of 1,556 photographers from more than 100 countries who were asked 63 questions about everything from how often they manipulate photos to whether they would advise their children to pursue photography. In a collaboration between World Press Photo, the University of Stirling and Oxford University’s Reuters Institute for the Study of Journalism, researchers compiled a 76-page document that looks at the characters, working conditions, technology use and ethics of photojournalists today.

They found that twenty and thirty-somethings make up roughly half of the photographers who participated in the survey. This group is more likely to shoot video in addition to still, and to use drones. Not surprisingly, they use social media more often and they are doing it in new and interesting ways. They also show an equal amount of training in things like education, video training, audio training and web design training, compared to their older counterparts. And yet, many of them are self-employed.

Despite their surprising competitive edge, the findings suggest a degree of ambivalence among young photographers about the relevance of the lessons received. Asked whether their formal training had equipped them for the profession, less than half (47%) agreed that this is true and 16% felt that their training had not equipped them at all.

In fact, what they appear to value most is collaboration, showing that they were more likely to work in multimedia teams than their older counterparts. Among those 29 or younger, nearly 70% said they have worked on a multimedia team, while that number plummets to 62% for those in their 30s and drops to 46% for those 60 or above.

While venturing beyond the constraints of how previous generations have shared their content, these photographers also face the challenge of where to stand on the uncertain spectrum of professional ethics with the onslaught of digital software that provides an extensive palette of options for enhancing and manipulating images. Nearly the majority of photographers in the survey said they feel that understanding ethics is important. However, when it comes to the particulars, researchers found a significant number of photographers engaged in manipulation and staging practices.

Nearly 30% of photographers admitted to altering the image content, other than by cropping, at least sometimes. When asked if they stage images by asking subjects to pose, repeat actions or wait for them to shoot the picture, 36% said ‘never’ but 52% said ‘sometimes’—with 12% even saying they did at least half the time. What’s more, 57% of the respondents said they use their own standards instead of following their company’s guidelines.

For Pete Pin, a Cambodian-American photographer based in Brooklyn, the times are changing and photographers have to change with them. He feels that the functions used to edit photographs—dodging, burning and cropping in photoshop—are digital equivalents of tools that were used by photographers for generations in the darkroom. “Because the editing happens in Photoshop, people equate this to manipulation,” he says. “I believe this is wrong. It upsets me when older photographers make this point, as if to deny my generation tools and techniques that they used without question in the analog days.”

David Campbell, one of the three authors and a past secretary to the World Press Photo contest, says that while he has heard this argument before, there is a little more nuance that photographers should consider. “It’s time to put the dark room analogy to bed,” he says. “It is true, those photoshop tools have names that apply to things that were done in the darkroom, but the function and the capacity is very, very different.”

Los Angeles-based photographer Peter Bohler says that rather than reflecting specifically on young photographers, these findings uncover some larger problems in the industry: uncertainty in company guidelines, reliance on sponsored content, and a kind of ambiguity surrounding standards in general. “What does ‘enhance’ mean? ‘Darkroom’ style adjustments are usually permitted although even in forums like the World Press Photo Awards, what specifically is meant by that is confusingly opaque,” he asks.

For young photographers, the responsibility falls on the individual to gain an accurate understanding of the story and to mindfully make the pictures reflect that, he adds. “You need to be able to trust the voice of a photographer in the same way that you would trust the voice of a writer. As photography becomes more of a commodity and photographers are viewed as replaceable or interchangeable, it’s hard to have that kind of reputation.”

Some organizations that are commissioning photographers today will make that very explicit in their commission and others perhaps less so, Campbell says. “It’s not surprising that you are relying on a personal standard, but it does indicate a personal need for more discussion and more obvious industry resources that they can tap into as a way to think about these issues.”

Many young photographers still face logistical challenges as well. The researchers noted that those most exposed to physical risks are younger, company employees. Their susceptibility to risk was heightened by the solitary nature of their work.

Financial risks, too, are felt deeply by the participants. In common with almost every occupation, the youngest in this study earned the least and the oldest the most, on average. But today more than ever, photographers themselves can perpetuate the pay rates. “If young people continue to give their content out for free, we will kill all [of the] professional industry,” says Olga Kravets, a documentary photographer, filmmaker and multimedia producer. “The most hilarious letter I ever had on this subject, was from a lady who had started a new magazine and wanted to publish my work from Israel. When I asked her about the fee, she turned that upside down. Her reply was something like, ‘no, we will never ask photographers to pay us to be published, it is free for you!’”

Kravets urges young people to take a stand as a community. “Older people don’t give their content away, and that is why they earn more.” 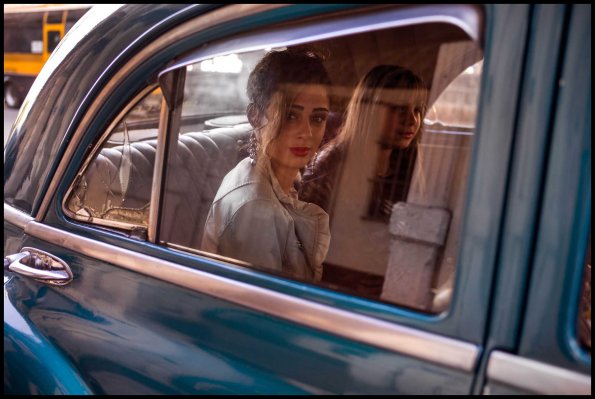 A Rare Glimpse Into Daily Cuban Life Across the Decades
Next Up: Editor's Pick