Here's What Anne-Marie Slaughter Has to Say About Sheryl Sandberg

Anne-Marie Slaughter, president and chief executive officer of the New America Foundation, gestures as she speaks during a session on the opening day of the World Economic Forum (WEF) in Davos, Switzerland, on Wednesday, Jan. 21, 2015. (Chris Ratcliffe/Bloomberg--Getty Images
Bloomberg—Bloomberg via Getty Images
Ideas
By Charlotte Alter
Charlotte Alter is a national correspondent for TIME

Anne-Marie Slaughter doesn’t shy away from her philosophical differences with Sheryl Sandberg in her new book — but she’s not throwing any punches either.

In Unfinished Business, out this month, Slaughter lays out why she disagrees with some parts of the Lean In philosophy, but respects the Facebook COO as a leader. The two women have often been held up as opposing voices in the debate about why exactly women can’t rise to the top professionally. In Slaughter’s 2012 Atlantic article “Why Women Still Can’t Have It All,” she argued that American workplace structures are inherently hostile to women; Unfinished Business is basically a follow-up, expanding on the argument that society needs to implement fundamental structural changes if women are ever going to be able to succeed equally at work. Sheryl Sandberg’s 2013 blockbuster Lean In argued that internal cultural and psychological pressures allow women to hold themselves back. It’s the classic case of structure vs. agency, and each woman’s arguments have often been used to refute the other’s.

Read More: Women Are Sexist, Too

In the book, Slaughter has a lot of nice things to say about Sandberg. She calls the Facebook COO “an avatar for a revived feminism,” and says she is “genuinely motivated by the desire to see thousands more women make it to the top and millions rise higher than they are now.” She also says she’s seen firsthand some of the positive effects of Sandberg’s work, noting she’s personally witnessed women seeking promotions and asking for raises specifically because of Lean In. And Slaughter’s argument that men have to pick up more responsibility at home — and women have to let them — is pretty consistent with Sandberg’s ‘All In’ movement, which encouraged men to ‘lean in’ to their home and childcare responsibilities.

Here’s how Slaughter assesses the Lean In message:

She also says that she and Sandberg are ultimately on the same team: “We both encourage women to speak up and take their place at the table; we both want to see many structural changes in the workplace. To some extent the difference between us is largely a matter of which side of the equation to emphasize.” She noted some of their differences come from their different ages — Sandberg wrote her book at 43, when her kids were young, while Slaughter wrote her book at 53, with teenage children. Slaughter says that she might have agreed more with Sandberg at 43, but that her age “gave me insight into the circumstances and choices facing the many women who have found that for whatever reason, leaning in simply isn’t an option.”

But Slaughter also lays out some of ways their arguments are fundamentally opposed: “We often cannot control the fate of our career and family; insisting that we can obscures the deeper structures and forces that shape our lives and deflects attention from the larger changes that must be made.”

Here’s how she describes it:

So no fighting here — just a pretty sane and ultimately respectful debate about how best to achieve equality. 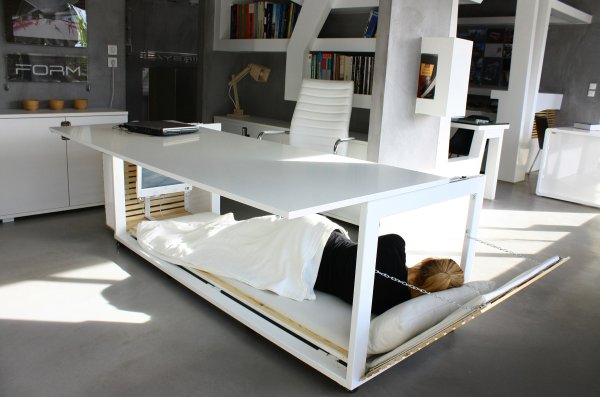 This Desk That Converts Into A Bed Takes Napping Up A Notch
Next Up: Editor's Pick