A Year After the Umbrella Revolution, Calls for More Autonomy, Even Independence, Grow in Hong Kong

A protester wears the colonial Hong Kong flag around his shoulders as he attends a pro-democracy rally in Hong Kong on July 1, 2015
Anthony Wallace—AFP/Getty Images
By Alissa Greenberg

Sai Yeung Choi Street in Hong Kong’s blue-collar Mong Kok neighborhood was a riot of color on the night of July 11 — in more ways than one. Neon signs blared overhead; tinny music from open-air karaoke competitions mingled with the scent of street food. Pedestrians thronged the pavements.

But a group of people stood out. In front of an electronics store, stony-faced policemen had formed a circle around two men — one skinny with greasy bleached hair, the other beefy with a shaved head — and were protecting them from an angry crowd. The men were suspected of organizing performances by groups of dancers, who performed to songs in China’s lingua franca, Mandarin. It was a culturally insensitive — some would say provocative — choice of language for a neighborhood like Mong Kok, which locals regard as heartland Hong Kong. And heartland Hong Kong, above all, is Cantonese-speaking.

Furious demonstrators surrounded the men. “F— your mother, go back to China!” one yelled. Others unfurled flags emblazoned with the Union Jack and the old Hong Kong coat of arms. The flag of colonial Hong Kong has become a potent political symbol in recent years, expressing not so much a love of Britain but a straightforward opposition to China, the Communist Party and everything it stands for. The waving of the flag has become acutely embarrassing to Beijing, but the more Chinese officials complain about it the more it appears at protests.

With some effort, police officers shepherded the men into a van waiting to drive them to safety, but the crowd stayed on. As insults turned to scuffles, some were arrested, others knocked down and pepper-sprayed. For the police, it was yet another encounter with Hong Kong’s vociferous localists. Theirs is a small but active movement that has gained ground following the pro-democracy Umbrella Revolution protests that convulsed the city last autumn and winter. What they seek, at the very least, is greater political and cultural autonomy from China. Some demand outright independence and the formation of a city-state. To a supporter of localism, a musical performance in Mandarin isn’t simply entertainment. It’s a symbol of cultural encroachment by a detested sovereign power.

It is happening quietly — buried within a flurry of small-scale protests, grassroots organizing, and social-media campaigns — but this moment of defiance may mark a turning point for Hong Kong politics. In June, Chin Wan, a professor of Chinese at Hong Kong’s Lingnan University and the figure generally acclaimed as the godfather of localism, published an op-ed in the New York Times advocating not a unified state but a “Chinese confederacy” that would include a democratic mainland, as well as Taiwan, Hong Kong and Macau.

But no longer is the movement confined to the academic or political fringe. Hong Kong’s soccer fans have taken to jeering the Chinese national anthem at matches. And, in an essay for TIME, Joshua Wong, a prominent leader of last year’s Umbrella Revolution and one of the city’s most recognized political figures, says self-determination is the only solution for Hong Kong. “Hong Kongers should not only focus on universal suffrage, but also fight for the city’s right to self-determination,” he writes.

Localists may have different views on how to get there, but Jerome Chiu, of localist group Civic Passion, tells TIME that “the common denominator is [a desire] for Hong Kongers to decide their local affairs themselves rather than have them be decided by the mainlanders.”

‘Have Sacrifice in Your Heart’
While last year’s Umbrella Revolution focused mainly on freer elections for the city’s leader, localists are dedicated to something far more revolutionary: a conviction that Hong Kongers should be able to make all political decisions for themselves. The nascent movement marks the first time that groups of Han Chinese — as opposed to, say, Tibetans or Uighurs — have publicly discussed independence on mainland Chinese soil since the founding of the People’s Republic. To be sure, the issue of independence is part of everyday political discourse in Taiwan, which China has regarded as a renegade province since Nationalists decamped there in 1949. But these fresh calls are being made in one of China’s showpiece cities.

With names like Hong Kong Blue Righteous Revolt and Valiant Frontier, localist groups advocate for a complete rethink of the city’s relationship with China. At a minimum, that would involve a rewriting of the Basic Law, the city’s equivalent of a constitution. Some hope for the foundation of a republic, others dream of a return to British rule. Some are determined to fight peacefully, but many say they are prepared to use force to achieve their aim, and talk of violent protests and even kidnapping and assassinations. Even if this is only theoretical, it is still a shocking departure from the normally peaceful conduct of Hong Kong politics.

“It’s better than sitting on the ground and waiting to be arrested,” one young localist, sitting in a garishly lit McDonald’s, tells TIME, referring to the passive resistance of some pro-democracy protesters. He spoke on condition of anonymity.

John Ho, 42-year-old founder of Hong Kong Localism Power, says: “If somebody wants a revolution, they want to fight back against the police, we will say, ‘Thank you.’”

Another localist, who was pepper-sprayed at the Mong Kok protests, spoke to TIME, also on condition of anonymity, not long after. “If you love your country, if you want to change your country, you should take a stand, you should have sacrifice in your heart,” she said, her voice steady. Then she shook her bangs out of her eyes. “If I could do anything, I would use bombs and guns.”

Whether not she meant it, or was simply putting on a show of jejune bravado for the international media, was uncertain. But it is undeniable that some young Hong Kongers feel pushed to the limit. Since the return of Hong Kong to Chinese sovereignty in 1997, tension has been building on several fronts. Those range from 2003 protests over a national-security bill that critics feared would suppress political freedoms, to hunger strikes and demonstrations in 2012 that forced the government to back down from the introduction of “national education” in public schools — using a curriculum widely derided as little more than communist propaganda. There have been tense protests against so-called parallel traders, or mainland Chinese who come to Hong Kong and deplete local stores of essential goods like infant milk formula, in order to resell them over the border at a substantial mark-up. Mainland investors have also been blamed for driving up local property prices, putting even small suburban apartments beyond the reach of young professionals.

Connecting these issues is the conviction — shared by many ordinary Hong Kong people, not only localists — that the city is not being given the high degree of autonomy that it is promised in the Basic Law. The 7.2 million people of Hong Kong are highly educated and avaricious consumers of media of all kinds and yet they are not allowed to choose their own leader. The chief executive, as the city’s top official is known, is presently selected by an electoral college of just 1,200 individuals, many of whom are pro-establishment and pro-Beijing figures. In a bid to placate popular opinion, the government proposed electoral reforms this year that would have allowed every registered voter a say in the Chief Executive’s selection, while complying with Beijing’s insistence that every candidate be screened for their acceptability to the central government. The city’s democrats rejected the proposal, saying that an election without the ability to freely nominate candidates was a sham.

In the political stalemate and frustration that followed, localism took root. Some of it can sound like ugly prejudice. Mainland Chinese are referred to as rapacious “locusts,” and seen as “disgusting,” “uncivilized,” and “immoral,” in language reminiscent of ultra-nationalist and rightist rhetoric everywhere.

But Maya Wang, a China researcher at international watchdog Human Rights Watch, says that the dynamic is more nuanced than bigotry. The mainland government’s authoritarian treatment of other its other two supposedly autonomous regions, Tibet and Xinjiang, is reason for Hong Kongers to be “very, very nervous,” she tells TIME, calling localist fears “very much legitimate.” She criticizes the tendency of localists to turn resentment of the central government into anger at ordinary mainland Chinese. Still, she adds: “The central point is that Hong Kongers do not feel that they can control policies that are very central to their lives. There’s no possibility for genuine political participation.”

A year after the Umbrella Revolution, as Hong Kongers reflect on the city’s lack of political development, more appear to be turning the localism for answers. The magazine Undergrad, published by Hong Kong University — the city’s oldest tertiary institution and regarded as its most prestigious — discussed independence in a controversial issue this February. From there, the issue garnered enough attention to warrant discussion in a March closed-door meeting in Beijing, during which chairman of the National People’s Congress, Zhang Dejiang, reportedly referred to calls for independence as “intolerable.” Groups advocating for independence “damage the interest of most Hong Kongers and threaten national security … They go against the will of the people,” he said, according to the South China Morning Post.

That doesn’t seem to have slowed the movement’s momentum. Hong Kong University Student Union external affairs secretary Samuel Lai told TIME this summer that “quite a few members” of his organization, which played a significant role in the Umbrella Revolution, identified with localist views and supported the idea of independence. Localism “gives us an idea of how Hong Kong could be,” he said.

According to the Confucian precept, those who want to rule have to first think small. China’s most famous sage argued that it was first necessary to “cultivate yourself” and “put your family in order,” before you could “govern your state.”

Some localist groups define the movement precisely in this way, and Hong Kong people indeed have cultivation to spare. But as political divisions continue to deepen, localists are taking an enormous gamble that the broader Hong Kong family can be put in order, let alone have a state to govern. 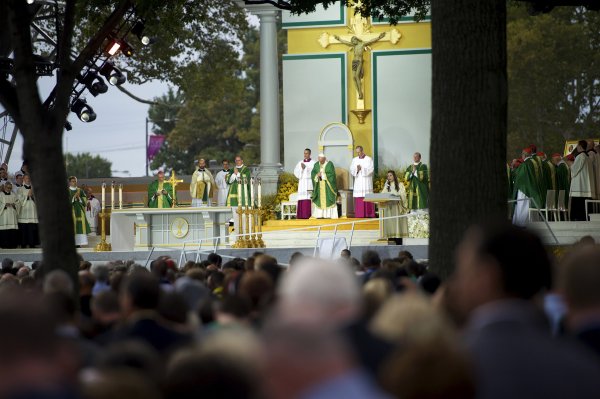 Read Pope Francis' Homily at His Final Mass in the U.S.
Next Up: Editor's Pick